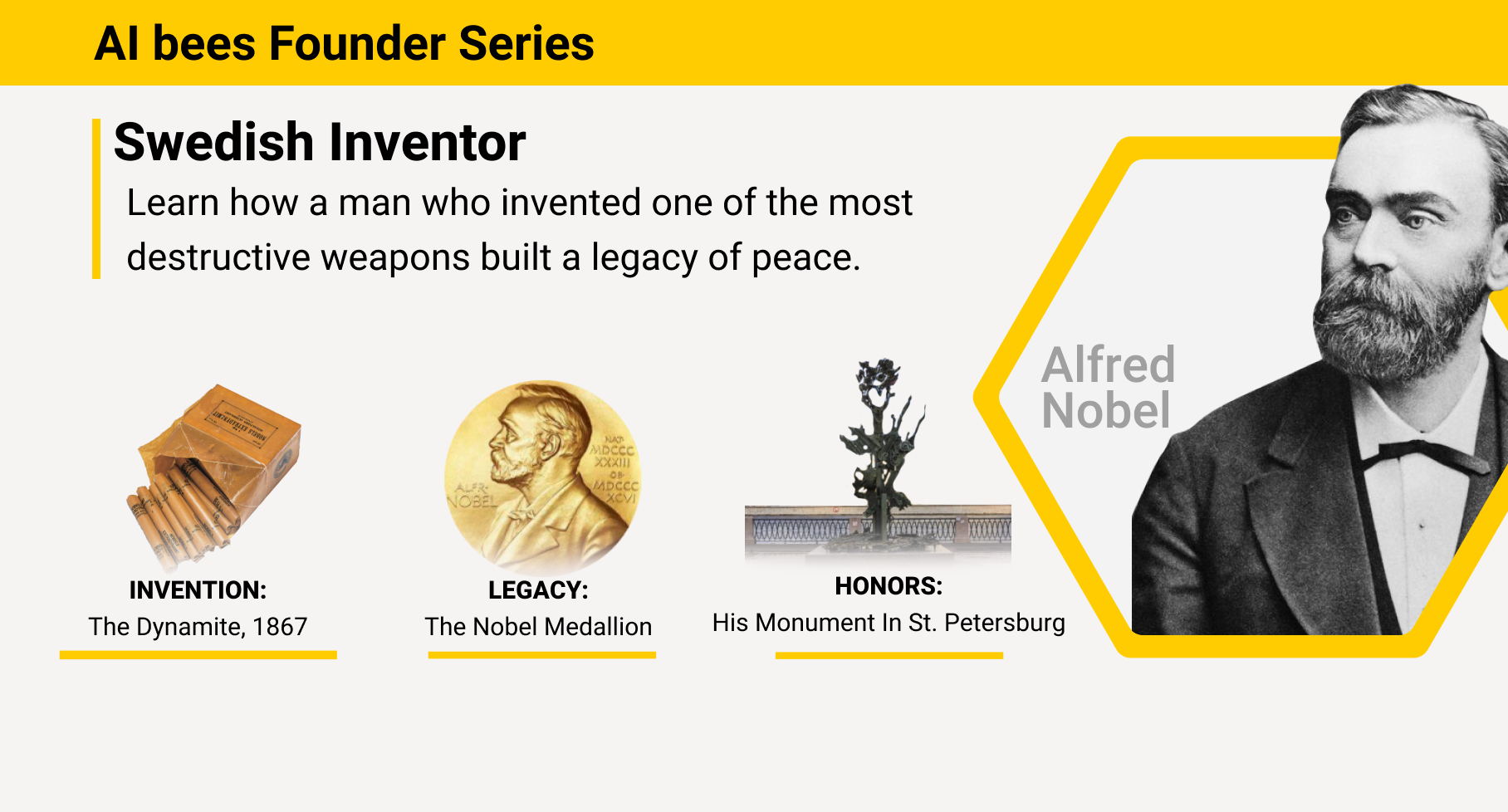 It’s amazing what we can find out in history when it comes to inventions of things that have shaped the world into what it currently is. Today we are going to focus on Alfred Nobel, The man whose legacy funds the peace prize with proceeds from his sale of explosions to the military.

Alfred was born in Stockholm on the 21st of October 1833. His father, Immanuel Nobel, was an engineer and inventor who constructed bridges and buildings in the region. Four years after his birth, Immanuel took his family to greener pastures in Finland and Russia. His mother Andriette opened a grocery shop while Immanuel opened a mechanical workshop that serviced the Russian army.

In fact, the naval mines invented by him prevented the British Royal Navy from storming St.Petersburg during the Crimean War of 1853-1856.

By age 17, Alfred was fully educated by tutors and was fluent in Russian, English, Swedish, and German.

Although versatile in subjects of chemistry and physics, his father found his interest in poetry irksome. In the drive towards sound education and to widen his horizons, he was sent abroad for further training in chemical engineering. He visited Germany, Sweden, the United States, and France.

In Paris, working in the laboratory of Professor T. J. Pelouze, he met the young Italian chemist, Ascanio Sobrero, who some years later invented nitroglycerine.

He knew that he should solve the safety of nitroglycerine before he could undertake other steps.

Although he was recalled home in 1952 to help the family business,  which was booming, providing for the Russian army, he and his dad continued the experiments he had begun in Paris on nitroglycerine.

As the Crimean War ended, Immanuel was once again forced into bankruptcy. In response, he and two of his sons (Alfred and Emil) returned to Stockholm, where Alfred continued his experiments.

In the course of his experiments, several explosions rocked Stockholm. The most important of which was that in 1864, which killed his brother and several others.

This incident led to the government declaring nitroglycerine unstable and banning it from Stockholm.

A barge anchored in Lake Mälaren became Alfred's new research site. He tested different additives that made handling nitroglycerine safer. The day he mixed nitroglycerine with kieselguhr (diatomaceous earth), the result was an absorbent material which "soaks up" the nitroglycerin. He found that the liquid could be shaped into rods of the appropriate size and shape for drilling holes.

With this discovery, he was able to mass-produce nitroglycerine in 1864.

He also invented an ignition device (blasting cap) that a fuse could light as an additional means of detonating dynamite rods. This marked the beginning of the modern use of high explosives.

Given its use in different industries, the market for dynamite experienced a boom which brought out Alfred’s skill as a businessman. By the late 1860s, he exported dynamite to other countries in America, Australia, and Europe.

Alfred’s busy life, dedicated to his inventions, however, made starting a family quite tricky. In fact, at age 43 in 1876, he put out this advertisement in the newspaper:

Given its use in different industries, the market for dynamite experienced a boom which brought out Alfred’s skill as a businessman. By the late 1860s, he exported dynamite to other countries in America, Australia, and Europe.

Alfred’s busy life, dedicated to his inventions, however, made starting a family quite tricky. In fact, at age 43 in 1876, he put out this advertisement in the newspaper:

A woman from Austria, Countess Bertha Kinsky, emerged as the top candidate. Her brief stint with Nobel gave way to her decision to marry Count Arthur von Suttner in Austria.

Despite this, Alfred Nobel and Bertha von Suttner remained friends and corresponded by letter for decades.

After his invention’s booming reception by the public, Nobel set up 90 factories in 20 countries across the globe, mass-producing dynamite.

When he wasn’t traveling, he was busy in his factories. As well as developing explosive technology, he developed other chemical inventions, including materials like synthetic rubber and leather, and artificial silk.

Nobel also went on to develop several other explosives and propellants, including smokeless powder ballistite. By the time of his death on 10 December 1896, in San Remo, Italy, he had 355 patents.
‍

Some of Nobel's companies have developed into industrial enterprises that still have a significant role in the world economy, such as:

One of his greatest strengths was the ability to combine the mind of an inventor and scientist with the dynamism of an entrepreneur.

. The tenets of his will came as a surprise as his fortune will fund Prizes in Physics, Chemistry, Physiology or Medicine, Literature, and Peace.

These highly placed prizes, still given today, include a medal, a personal diploma, a cash reward, and highly honorable regards.

Today, to receive the Nobel prize is the Pinnacle of one’s life achievement.

This year the Physics prize notably went to three physicists for their work in climate change and global warming.

There’s something to be said about a man who invented debatably one of the most destructive weapons ever and award prizes to figures who help keep peace and promote change in our society and our thinking in general.

This tells us that an innovator is more than willing to re-invent himself for a higher purpose. It may not be in his lifetime, but Alfred Nobel proved to have done so.