Login
Get a Demo
Subscribe to our Weekly Update!
Resources /
Marjorie Merriweather Post: The Feisty Female Mogul of the 1900s

Marjorie Merriweather Post: The Feisty Female Mogul of the 1900s 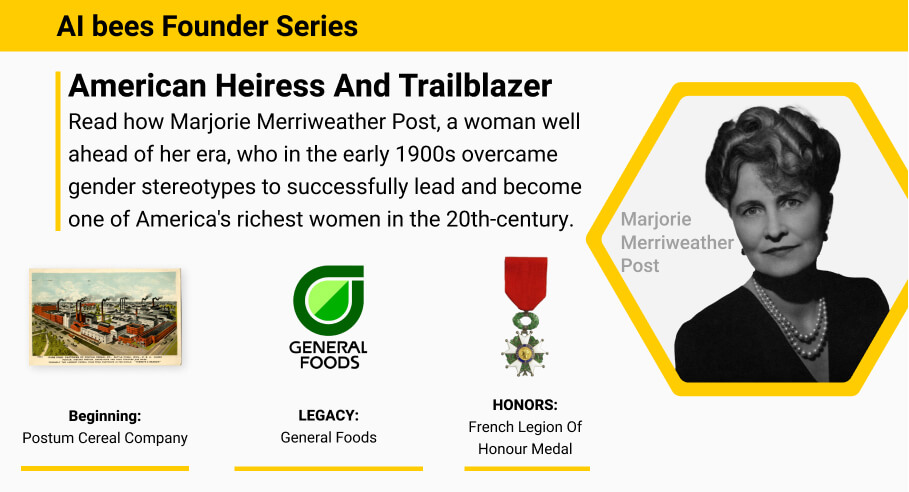 Post may have lived like royalty, but she was so much more than a well-heeled socialite with impeccable taste.

Marjorie Merriweather Post was a successful businesswoman and entrepreneur in the early 1900s who successfully overcame female prejudices to lead and expand a powerful American corporation.

Marjorie Merriweather Post was born in Springfield, Illinois, in the United States, on March 15, 1887. She was the only child of C.W. Post, a businessman (the cereal mogul who spent time in the sanitarium and essentially stole Kellogg's idea and created the 'Postum cereal company’)

Marjorie used to help her father market 'Postum' to retailers when she was a kid, although they weren't very successful at first. C.W. Post then started an advertising effort to popularize 'Postum,' and Marjorie's family had become prosperous by the time she was a teenager. Marjorie's father instilled in her a business education and required her to attend corporate meetings and factory visits. Marjorie went to 'Mount Vernon Seminary' since her father wanted her to be socially prepared.

Marjorie married soon after. Her father then divorced her mother and married Leilah Young, his secretary. He gave Leilah half of his stock.

Her father committed suicide in 1914. Marjorie then took over the family business and demonstrated that her father had promised her all his holdings. She made a $6 million payment to Leilah.‍

Postum Cereal Company was founded when she was young, and she was the brilliant business brain behind multiple mergers and acquisitions that helped the company grow tremendously.

Postum bought Calumet Baking Powder, Swan's Down Cake Flour, Minute Tapioca, Jell-O, and Baker's Chocolate, which had developed America's first chocolate mill in the late 1800s, thanks to Marjorie and her husband.

In 1925, they made their most significant acquisition, Cheek-Neal. Nashville's Joel Cheek had created a vacuum-packing technology for pre-ground coffee. He put it to the test at the Maxwell House Hotel in Nashville, and it was a big hit.

However, none of Post's acquisitions would be more significant than her stake in Clarence Birdseye's frozen-food company.

Sure, Birdseye's investment was beneficial to the corporation. Still, the concept of selling frozen goods transformed food distribution, allowing companies to supply consistent food in enormous quantities to consumers across the country.

A serendipitous encounter led to the decision to invest in Birdseye's frozen food business. Post and Hutton dined on an excellent goose meal while sailing on her yacht, the Sea Cloud.

Post was so taken aback by the goose that she inquired who was responsible for the delectable feast. That's when she discovered the geese had been frozen, thanks to inventor Clarence Birdseye's innovative preservation concept.

On the other hand, her husband was not thrilled with the Birdseye notion since customers lacked refrigerators in their homes, supermarkets lacked freezers, and trucks lacked freezers. But, as is customary, the tenacious Mrs. Post triumphed.

Three years later, in 1929, Postum purchased the Birds Eye operation for $20 million and renamed it the General Foods Corporation

The Postum Company changed its name to the General Foods Corporation in June 1929, which was a more appropriate name. (General Electric and General Motors were created in 1892 and 1908, respectively, and were followed by General Tire, General Mills, and a slew of other "General" enterprises.) Birds Eye would become a

household name thanks to General Foods, which dominated the frozen food market.

Another "food conglomerate" was founded at the same time in that merger-filled era — June 1929. Fleischmann's Yeast, Royal Gelatin and Puddings, and Chase & Sanborn Coffee were the foundations of the Standard Brands Company.

National Dairy Products, a merger of multiple dairies and ice cream companies, was another food behemoth founded in the late 1920s. After purchasing the Kraft-Phenix Cheese Firm in 1930, National Dairy became the world's largest cheese producer; the company was later renamed, Kraft.

Marjorie Merriweather Post received the Silver Fawn Award from the Boy Scouts of America in 1971 for her outstanding contributions to Scouting and the French government's Legion of Honour.

The Merriweather Post Pavilion in Columbia, Maryland, and Lake Merriweather in Goshen Scout Reservation in Goshen, Virginia, are both named for her.‍

Mrs. Post was a woman much ahead of her time. Her growing experience in entrepreneurship is shown in this story, as she was able to spot a commercial potential before anyone else. She developed what is now known as General Foods Corporation by expanding on her father's single food product and buying and investing in additional products.

Marjorie's tale exemplifies the concept that no one is born an expert. She was put into a powerful position unexpectedly, and instead of shrinking from the situation, she embraced a growth mentality. Marjorie was one of the most successful persons of her day because she asked questions, took risks, and overcame structural barriers.