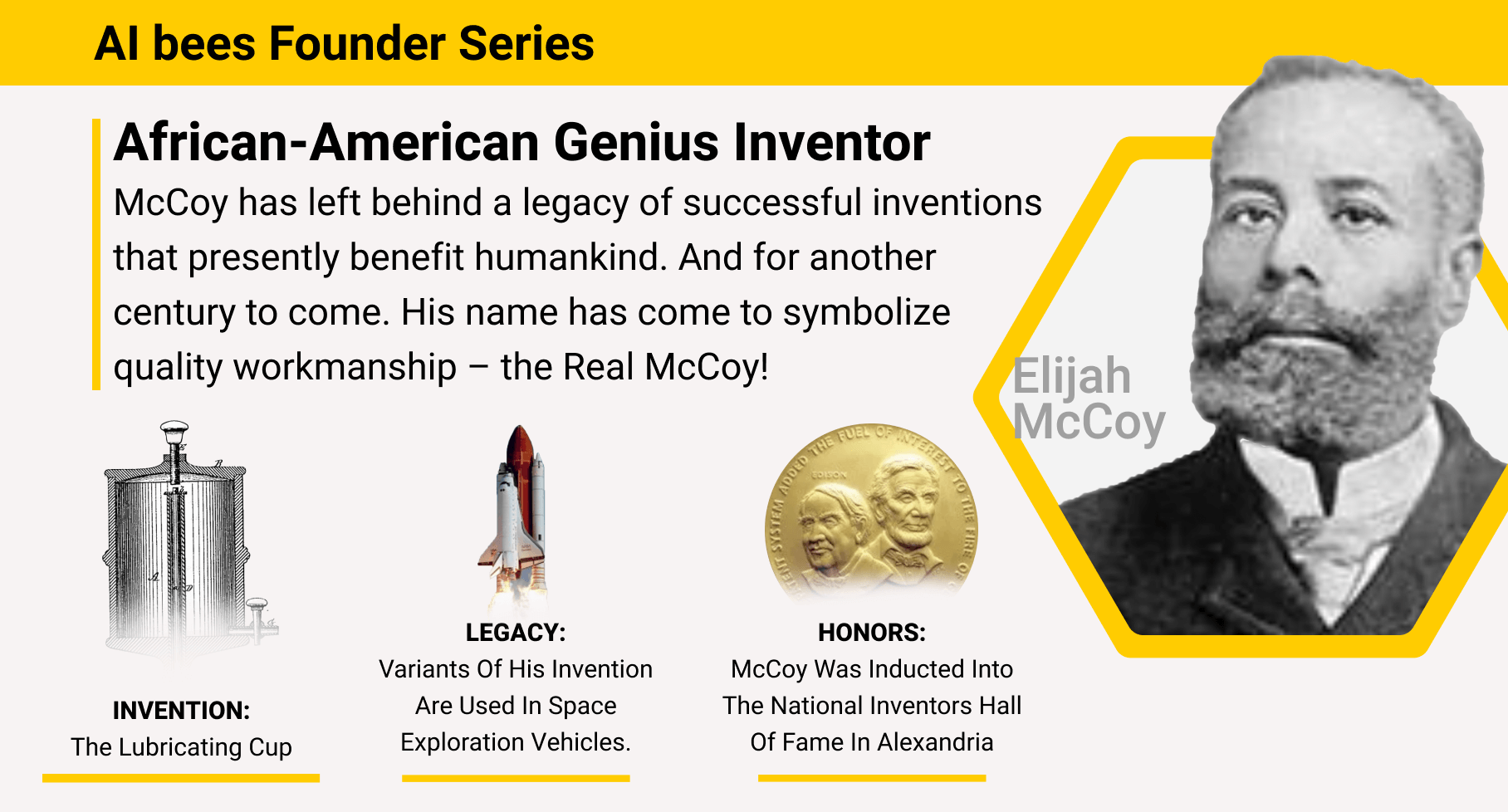 Imagine riding on a train, and before long, it has to stop to let oilmen lubricate the machine to avoid breakdowns.

Wouldn't you admire the bravery of these men? Indeed you should!

Elijah McCoy did precisely those things for years until he found a way to automate lubrication, so the train didn't have to stop for lubrication anymore. And men's lives wouldn't be in so much peril.

Elijah McCoy was an African American born free in 1844 in Canada to George and Mildred McCoy. His parents were fugitive slaves who had escaped from Kentucky to Canada via helpers through the Underground Railroad. He had ten siblings.

Even as a young boy, McCoy showed a strong interest in mechanics. McCoy had a particular fascination with mechanical devices and spent much of his boyhood tinkering with machines. His parents are happy to see that he succeeded in repairing broken ones more often than not.

So at the young age of 15, with the moral and financial support of his parents, McCoy traveled to Edinburgh, Scotland, to begin an apprenticeship in mechanical engineering.

After becoming certified as a mechanical engineer, he returned home to Michigan.

Even with excellent credentials, McCoy was unable to find work as an engineer because of racial barriers. He then took on a position as a fireman/oilman on the Michigan Central Railroad. It was in this occupation that he developed his first significant inventions.

Work as a fireman/oilman was a far cry from engineering, but it allowed him to develop his ideas for making the lubrication of moving parts much easier.

McCoy observed firsthand the shortcomings of the present system of oiling axles, so he invented a device he called lubricating cup to distribute the oil evenly over the engine's moving part.

And in 1872, McCoy invented the 'lubricating cup' that automatically drips oil when and where needed.

The lubricating cup would be Elijah McCoy’s most famous invention. It would be adjusted and modified to apply to different types of machinery. Versions of the cup were later used for steam engines, naval vessels, oil-drilling rigs, mining equipment, factories, and construction sites.

McCoy continued to refine his devices, receiving 57 patents throughout his esteemed life. The majority of his inventions are related to lubrication systems. But out of necessity, he also developed designs, including an ironing board, a lawn sprinkler, and other machines.

In 1872 McCoy received a patent for the device. It was enormously successful. Orders for the lubricating cup came in from railroad companies all over the US. Many inventors attempted to sell their versions. But most companies wanted the authentic device. They would request for "the Real McCoy."

In 1882 McCoy's hydrostatic lubricator for locomotive engines and his designs for ship engines considerably impacted the transport industry in the late 19th century.

In 1915, he patented the graphite lubricator designed for “superheater” locomotive engines. This became his most elaborate innovation.

The quality of his inventions is as good as a solid handshake in the olden days, as good as the ink on the contracts in modern business settings.

He died on October 10, 1929, and was buried in Detroit Memorial Park East in Warren, Michigan.

1974. Michigan put a historical marker at the McCoys' former home at 5720 Lincoln Avenue and his gravesite.

1975. Detroit celebrated Elijah McCoy Day by placing a historical marker at the site of his home. The city also named a nearby street for him.

1994. Michigan installed a historical marker at his first workshop in Ypsilanti, Michigan.

2001. McCoy was inducted into the National Inventors Hall of Fame in Alexandria, Virginia.

The impact of McCoy's ingenuity and the quality of his inventions have created a level of distinction which bears his name. The real McCoy.

This expression became part of our language, as the 'Real McCoy' came to mean whatever was the best and genuine article applied to all things.

And so, together with his inventions, his name is one of Elijah McCoy's most significant legacies.

Innovation and passion. When I think about Elijah McCoy, these two words come to mind. His success and everlasting legacy are founded on these two commendable traits.

With his engineering genius, he fuelled the economy to the next century and beyond. Our means of transportation wouldn’t be where it is today if not for him.

As in life and business, there is always room for creativity and improvement.