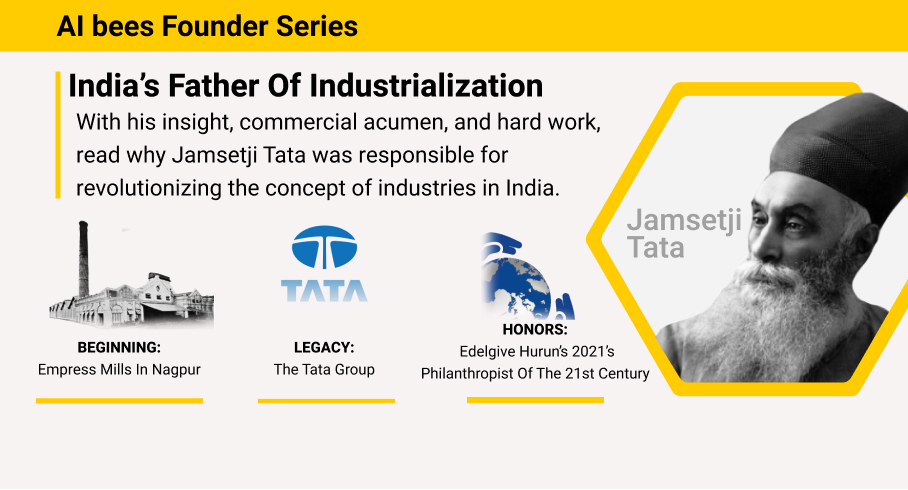 As John D. Rockefeller was building unimaginable wealth in the United States in the 19th century, which he would devote to improving the welfare of the nation, Jamsetji Nusserwanji Tata was doing the same in India.

He was reputed to have transformed muck into gold, but the real magic was his skillful management, leadership, and honesty. He consolidated the Indian industry and enterprise to a great extent.

Jamsetji possessed an amazing ability to spot an excellent business opportunity and a sincere desire to better his countrymen's lot. As a result, a little-known Zoroastrian family rose to become India's most powerful business dynasty.

Jamsetji's upbringing didn't leave any indication that he would be responsible for his own destiny. He was the first child and only son of Nusserwanji Tata, the scion of a dynasty of Parsee priests, and was born on March 3, 1839, in the peaceful village of Navsari in Gujarat.

Many generations of the Tata family had served as priests, but the entrepreneurial Nusserwanji broke the mold by becoming the family's first businessman.

Jamsetji was born in Navsari and moved to Bombay with his father when he was 14 years old.

1858, the equivalent of today's graduate.

Jamsetji's liberal education instilled in him a lifelong reverence for academics and a passion for reading. Those passions, however, would rapidly take a backseat to what Jamsetji soon realized was his true calling in life: business.

It was an inopportune time for a young local to take his first timid steps into the tumultuous world of Indian commerce. Jamsetji's entrepreneurial career began

"When the passive despondency created by colonial authority was at its peak," as JRD Tata put it. ‍

Jamsetji joined his father's small merchant and banker business just two years after the Indian Mutiny of 1857. He was only 20 years old at the time.

Bringing the best to India

Jamsetji founded a commercial company with a capital of Rs21,000 in 1868, which ultimately became known as The Tata Group.

He was 29 years old and wiser from nine years of working with his father. His first trip to England was soon after, where he learned about the textile industry.

He was optimistic that Indian enterprises might make a significant dent in the longstanding British domination of the textile sector. In 1869, Jamsetji began working in the textile industry. He bought a run-down and insolvent oil mill in Chinchpokli, Bombay's industrial heartland, renamed it Alexandra Mill, and turned it into a cotton mill.

Jamsetji sold the mill to a local cotton trader for a large profit two years later. He then went on a long trip to England, where he studied the Lancashire cotton trade in depth. Jamsetji was impressed by the quality of individuals, machinery, and produce he witnessed during his journey, but he was confident that he could recreate the tale in his own nation. Jamsetji was confident that he could challenge and defeat the colonial overlords in a game that had been rigged in their favor.

The dominant dogma of the moment dictated that the new enterprise be established in Bombay, but Jamsetji's genius informed him otherwise.

He reasoned that if he considered three key factors into his designs, he could increase his chances of success: closeness to cotton-growing areas, easy access to a railway connection, and enough water and fuel.

Nagpur, located in the center of Maharashtra's cotton-growing region, fulfills all of these criteria. With an initial capital of Rs1.5 lakh, Jamsetji established the Central India Spinning, Weaving, and Manufacturing Company in 1874. His company was poised to fulfill its destiny three years later.

The Empress Mills in Nagpur were founded on January 1, 1877, the day Queen Victoria was declared Empress of India. Jamsetji had departed on the first of his spectacular odyssey at the age of 37.

On a trip to Manchester to look at new machinery for his textile factory, Jamsetji attended a lecture by Thomas Carlyle, which spawned the iron and steel idea. He had set his heart on creating a steel plant that could compete with the greatest in the world by the early 1880s. This was a massive undertaking.

The industrial revolution that had altered Britain and other countries had largely overlooked India. Government policies, the difficulty of prospecting in remote locations, and plain bad luck exacerbated the situation.

"Those odd obstructions which hound the paths of pioneers who strive to modernize the East obstructed at every turn Jamsetji's progress," according to his biographer Frank Harris.

Jamsetji Nusserwanji Tata used his fortune to benefit India and its people. He remained strong in his ambition to see the project through. Along the way, he had to deal with skepticism from persons like Sir Frederick Upcott, the chief commissioner of the Great Indian Peninsular Railway, who threatened to eat a pound of steel if Tata Steel provide the British steel rails.
We don’t know if Sir Upcott did but we do know that Tata Steel supplied the steels rails for the British during World War I.

Jamsetji's economic achievements obscured a diverse set of passions and convictions that he carried and nourished throughout his remarkable life. He had a deep affection for Bombay, travel, and, above all, fresh ideas. Right up to his death in Germany in 1904, his mind was always pursuing knowledge and daring to push the boundaries of achievement. After his death, his sons Ratanji and Dorabji Tata took over the Tata Group.

He is most known for founding the Tata Group, India's largest corporate conglomerate and international corporation. The company has over 100 active firms, such as:

- The Tata Steel plant in Jamshedpur, which marked the country's transition from        trading to manufacturing.

As of March 2021, Tata Group’s  29 publicly listed enterprises have a combined market value of $242 billion.

The conglomerate now has business in several if not all industries such as automotive, steel consumer and retails, infrastructure, and even aerospace & defence