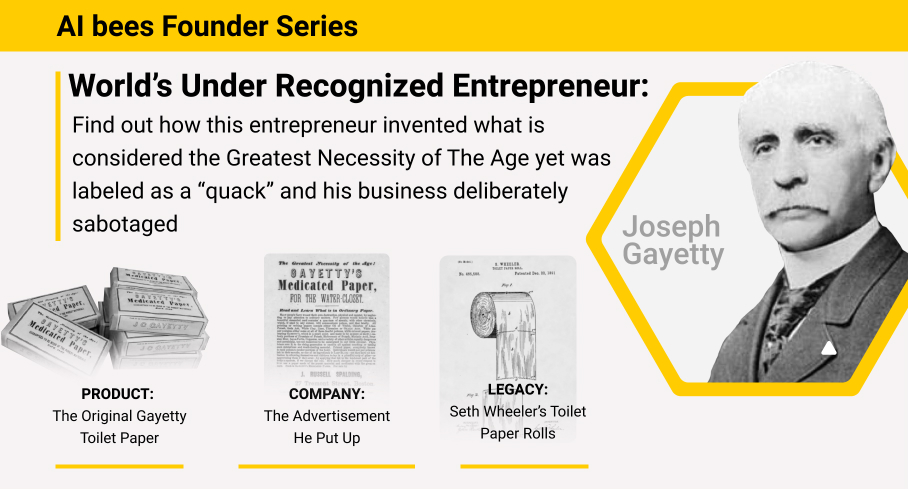 Have you ever sat back and tried to remember why some things were invented?

I mean, things like the curved barrel machine gun or the Venetian Blinds glasses or even the glowing car tires are just ridiculous. You can’t help but think, “what was this inventor thinking”? This question should not, however, be embraced today as we highlight the inventor of modern toilet paper.

From the beginning of time, human beings have always gone to the bathroom, even when the “bathroom” was just “that way”, behind the bushes.

When we think of toilet paper, well, the “paper” part of this item is obscured by the first word. You’ve heard of situations where many founders recall having an idea for their creations in obscure places, like in the shower or while driving, or even in a dream.

With this in mind, you can't help but wonder where Joseph Gayetty was when he decided to invent the modern commercial toilet paper. What kind of man was he anyway?

Many references cite that Joseph Gayetty was born in c.1817, give or take a decade, in Massachusetts, USA. Not much is known about his early years, seeing as the first mention of him was in the US census of 1850. By this time, he was living in New York City with his wife, Margaret Louisa Bogart, and their two children. His source of living was from his work at a public house (pub).

It was while working in New York that the idea of creating toilet paper came to him. Now it should be noted that in China, amongst the royals, a form of paper was being used for toilet purposes. These pieces of paper were always perfumed and extremely costly to come by. In 589 A.D, a scholar, Yen Chih-Thui, wrote,

“Paper on which there are quotations or commentaries from the Five Classics or the names of sages, I dare not use for toilet purposes.”

Everywhere else in the world, however, the notion of toilet paper was unheard of. Instead, the use of rags, animal skin, leaves, sticks, corn cobs or even hands, was in vogue.

By 1857, Gayetty had begun his toilet paper business and was listed as being in the “medicated paper” industry. By the 1860 census, he and his wife had added 3 other kids to the two they had a decade ago. They also had a personal servant, and a modest personal estate valued at $1000.It was also at this time that, during the census, that he said he was born in 1827 in Penslyvania. No records, however, exist to clear up the confusion about his birthplace and date. Gayetty and his wife had four sons and a daughter. The youngest son, Henry K. Gayetty, took over the family business in 1891, when the issue of trademark ownership came up. He also controlled the trademarks and licensing.

Joe C. Gayetty marketed his first toilet paper on December 8, 1857. Each of the sheets of pure Manila hemp paper was watermarked "J C Gayetty N Y". As a hemorrhoid medical product, the original product contained aloe as a lubricant.

Several medical organizations have labeled Gayetty a quack. The advertisement the following year referred to it as "The Greatest Necessity of the Age", medicated paper for the water closet. It also warned of the dangers of using toxic inks on sensitive areas of the body. A different advertisement, printed in 1859, mentions that he was offering 1,000 sheets for a dollar and that his business was at 41 Ann Street.

In 1890, Seth Wheeler, obtained the earliest United States patents for toilet paper and dispensers. And in 1890, the Scott Paper Company popularized toilet paper dispensed from rolls.

In 1891, Gayetty's brand and product were involved in a lawsuit brought by B.T. Hoogland's Sons, toilet paper dealers. Specifically, they filed a trademark infringement suit against Harry K. Gayetty and the Gayetty Paper Company. In their claim, B.T. Hoogland and Son claimed a debt they owed made them a rightful heir to the Gayetty name. A paper dated December 5, 1866, was allegedly given to a creditor in lieu of a $25 debt and later sold to B.T. Hoogland (senior) for one dollar.

However, on January 1, 1866, J.C. Gayetty signed a ten-year contract with Demas Barnes and Company for the exclusive sale and vending of the name, which had been assigned copyright in 1891. Despite being dismissed in 1894, a second lawsuit was filed. B.T. Hoogland's Sons next sued to stop Harry K. Gayetty and the Diamond Mills Paper Company from using the Gayetty name, and were successful in this case. Despite his appeal, Henry Gayetty lost at the Appellate Court.

Finally, in July 1900, the New York Supreme Court permanently ruled against the Diamond Mills Paper Company and Harry K. Gayetty from using the name on any similar paper product labels.

In 1900, an advertisement showed that New York's B.T. Hoogland's Sons distributed the "Papel Medicado De Gayetty," a paper attributed to Joseph C. Gayetty, the inventor, for his invention in 1857. English versions of this advertisement appeared in 1907 as well. The product was marketed until the 1920s. The production of splinter-free toilet paper by the Northern Tissue Company in 1935, also built on Gayetty’s invention, put it out of circulation.

From the 1930s different companies worked on Gayetty’s idea and toilet paper became an important item in every area of the globe. So, though his background is quite sketchy, we can’t but thank him for revolutionizing our bathroom trips.

Joseph Gayetty was a founder, who, although unknown, is an important figure in the history of the bathroom revolution. Despite living in a time when his invention was frowned upon and even ridiculed he was able to make it into something for others to build on and reform. His tenacity and hilarious marketing content is a great example for entrepreneurs today. Today, facilities all over the world make use of toilet paper and it is all because of Mr. Gayetty.