Login
Get a Demo
Subscribe to our Weekly Update!
Resources /
Alan Turing: The Once Obscure Father of Computer Science

Alan Turing: The Once Obscure Father of Computer Science 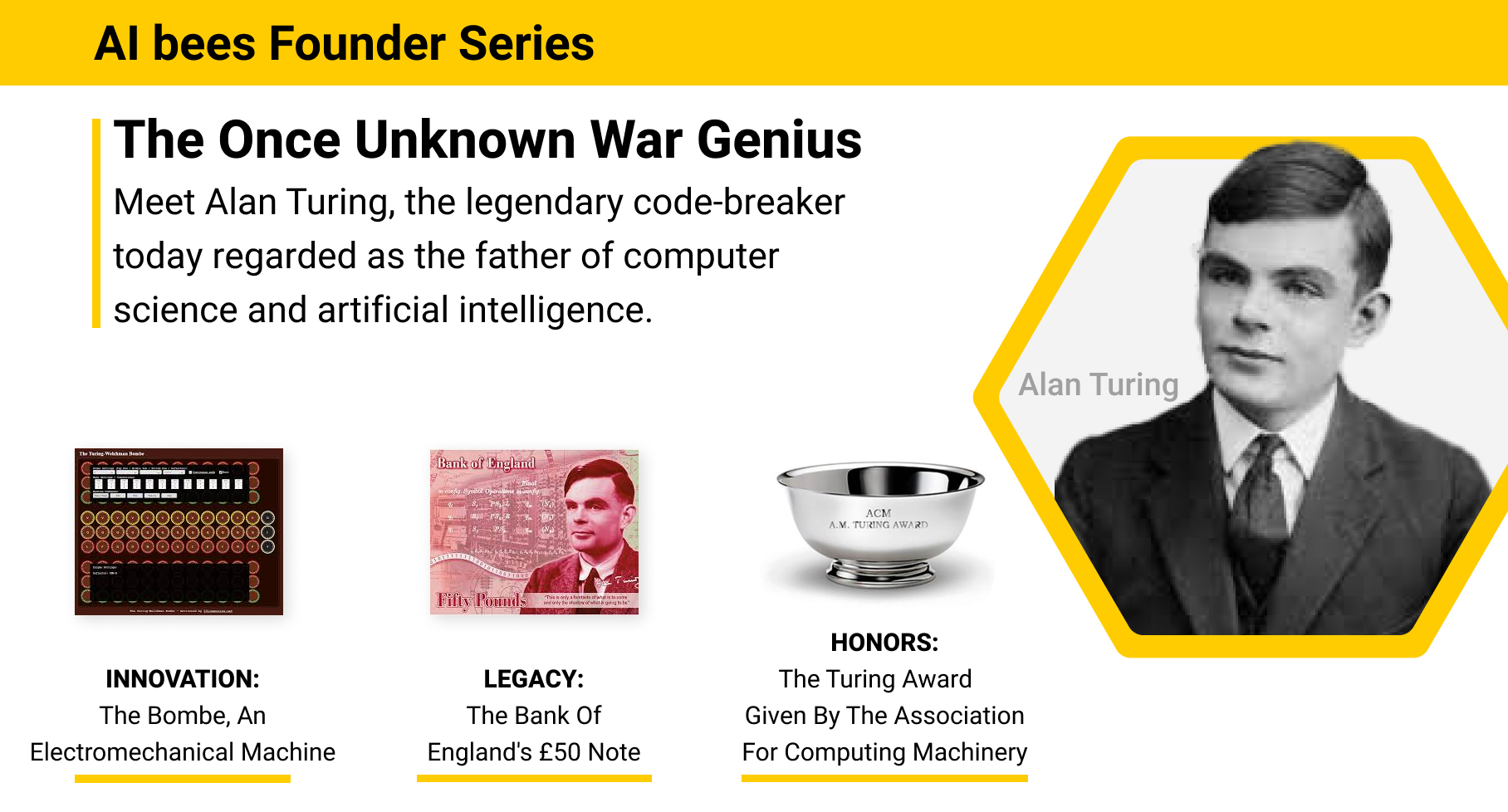 What's it like to come up with the concept of a modern computer after never having seen one? Or to go from being a code-breaking war hero to a criminal in the blink of an eye?

Before Benedict Cumberbatch's performance in 'The Imitation Game,' you might not have known who Alan Turing was. However, World War II could have turned out differently without him. He has been crowned the 20th Century's greatest icon, and he is now the face of the spanking new £50 note.

But who was Alan Turing, and why is he revered so much?‍

Alan Turing was born in Maida Vale, London, on June 23, 1912. It was a time when social status, church, and duty to the British Empire were critical. Turing was passionate about other subjects, including science, which severely embarrassed his mother. She expected to study classics and follow a "gentleman's" path.

Science was an extracurricular love for Turing, where he could completely express his creative thoughts and learn about the world's natural beauties. At 12, he became obsessed with "using the most common object in nature with the least amount of energy waste." He spent years pursuing the answers to life's most fundamental problems and the inner workings of the human mind. But we're talking about the 1920s here.

When Turing began his undergraduate studies at King's College, Cambridge, he finally showed his mind. In 1933, he began dabbling in mathematical logic, where he faced a problem that had yet to be solved:

Is there a mechanism for determining whether a mathematical assertion is true?

Turing showed his Turing Machine to answer such a question. A machine that could calculate anything that needed to be calculated. It was the blueprint for today's sophisticated computers. However, Turing came up with the concept without ever seeing one.‍

The Turing Machine was the first to introduce the idea of a universal machine. I don't mean a piece of physical equipment when I say machine; instead, I mean an algorithm or a formula. Some formulae or equations can solve a wide range of situations.

The Turing Machine was no exception, with an infinite memory capable of processing any set of instructions (an algorithm) through a mechanical process. This machine could not only solve one algorithm but all of them.

It was the One machine that could solve every problem that could calculate. As we know it today, the computer is a product of this process.

Turing's seminal work, which would shape an entire computing generation, had ended, but his tale had only just begun. On September 3rd, 1939, the United Kingdom declared war on Germany, kicking off World War 2.

Turing begins work at Bletchley Park, Buckinghamshire, as a cryptanalytic military headquarters during this period. Here, top-secret work is being done to decipher German military codes. Turing is the individual who can solve the problem.

Turing's primary concern was deciphering the German Enigma code. The Germans used this encoding equipment to convey messages about the position of armed units and U-boats. Polish mathematicians had previously solved the problem of interpreting an Enigma message, but the Germans were altering their cipher scheme daily. Turing and his team were tasked with creating a computer that could keep up with the rapid changes.

Turing invented the Bombe, an electromechanical machine. This gadget was instrumental in successfully decrypting German Enigma transmissions, and it decrypted German Air Force communications at Bletchley Park beginning in the 1940s.

Turing was also tasked with decrypting advanced German naval communications that had perplexed other cryptologists. He devised the Banburismus method, which allowed all encrypted German naval messages to be decoded. With this achievement, Allied ships could successfully maneuver away from German U-boat raids, helping to shift the tide of the Atlantic conflict.

According to some historians and Winston Churchill, Turing’s work at Bletchley Park helped cut the war in Europe by two to four years. Consider how many lives have been spared due to Alan Turing's work.‍

Setting the Stage for Artificial Intelligence‍

As World War II concludes, Turing turns his attention to artificial intelligence (AI). He creates a machine that can answer complicated mathematical problems, but how would the rest of the world assess its intelligence? It was necessary to conduct a test.

Turing's work, "Computer Machinery and Intelligence," was published in 1950, and it dealt with the concept of artificial intelligence and what is now known as the Turing Test. This test is still used to measure how far AI has progressed. It claims that a computer must deceive a human observer into believing it is human to think.

Eugene Goostman, a computer programmer, purportedly passed this exam in 2014. Some artificial experts are fighting for the victory, and we're still waiting for a more capable competitor.

Turing has accomplished a great deal at this point in his life. In a world where computers are taken for granted, it's difficult to express just how revolutionary his contributions were. Without Alan Turing, there would almost certainly be no computer.‍

Turing began dating Arnold Murray, a 19-year-old, in December 1951. Turing's home was robbed shortly after, in January 1952, and Murray informed Turing he knew who the perpetrator was, which Turing then reported to the police.

Turing acknowledged having a sexual connection with Murray during the investigation, which was prohibited in the United Kingdom, and the two were charged with Gross Indecency.

Turing pled guilty to the allegation on the advice of his lawyer and was found guilty in March 1952. He was offered the option of either prison or chemical castration when he was condemned.

Turing was discovered dead next to a half-eaten apple in 1954. What caused death? The most likely cause was exposure to cyanide. Alan Turing, at 41, had committed suicide.

ALSO READ - The Triumvirate: A Catalyst for Social and Economic Development

Turing's contributions faded into obscurity after his death. Until the 1970s, the top-secret work he performed at Bletchley Park became public.

Benedict Cumberbatch played him in the 2015 film The Imitation Game, which immortalized him on the big screen. On Christmas Eve 2013, the Queen granted him a posthumous pardon for his offenses.

If you're lucky enough to have £50, you'll be able to get your hands on the new notes by the end of 2021. The notes will include a photograph of Turing and information about his work, such as technical drawings for the British Bombe, a device devised by the scientist that helped decode German signals encoded by Enigma devices.

The note will also include a quotation from Turing himself, which reads, "This is only a foretaste of what is to come and only the shadow of what is to be."

Turing made it feasible for computers to revolutionize our lives. But there's a lot more from him that we can take away:‍

Alan Turing's bold attitude to complex challenges helped him break new conceptual ground throughout his life. From his time at Cambridge, where he published papers considered the foundations of computer science, to his pivotal work at Bletchley Park cracking German codes.

Turing helped cut the Second World War by years, and his exploration of artificial intelligence and fascination with applying mathematics to the biological world left an indelible mark.

Turing was a brilliant collaborator despite his remarkable intellect, working with hundreds of women and men at Bletchley Park and with other mathematicians, engineers, and scientists throughout his career.

I can summarize this by the following quote from Turing: "The search for new techniques must be regarded as carried out by the human community as a whole"‍

What we believe about ourselves.‍

"I believe that the quest to construct a thinking machine will help us enormously in understanding how we think ourselves," Turing said in a BBC interview in 1951.

From speech-recognition software to algorithms utilized in criminal justice systems, 'thinking robots' are already commonplace. Therefore, human mindsets — our societal conventions and subconscious prejudices – must be carefully considered in developing and implementing these systems.

“We can only see a short distance ahead, but we can see plenty there that needs to be done.”