Login
Get a Demo
Subscribe to our Weekly Update!
Resources /
Hedy Lamarr: The Mother of Wireless Technology 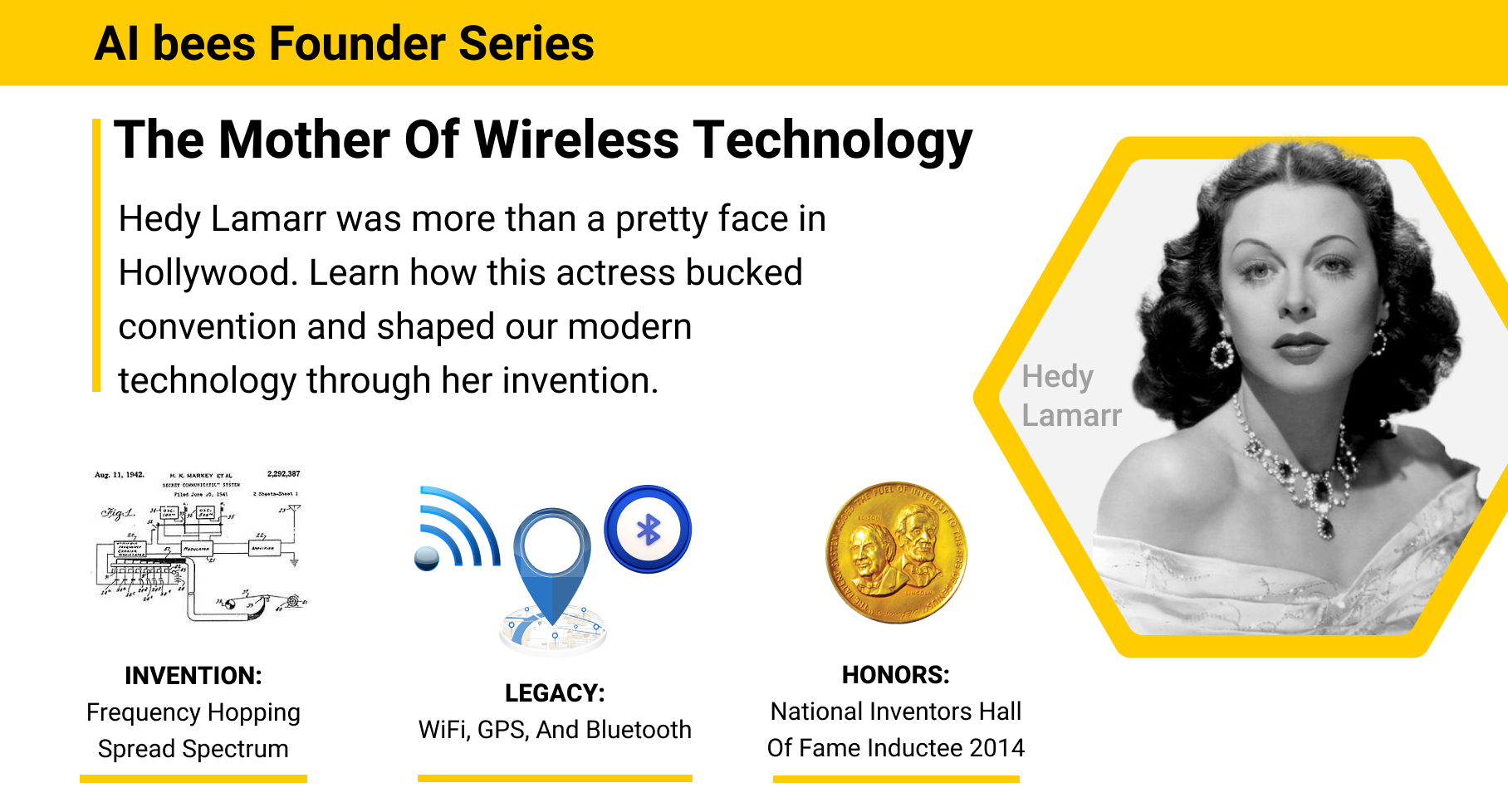 Indeed, with the advent of wifi, technology has dominated our daily lives. A few years back, there was an extensive survey asking respondents to rate the things they wouldn't be able to live without. And where do you think the internet or wifi is placed?

Right on! At the absolute top of the list includes family, friends, bath/shower, TV, mobile phone, PC, and even chocolate, among others!

The internet and wifi access are essential to us in our modern lives and are completely necessary for our daily undertakings.

Respondents in the same study stated that they would instead go without food for a more extended period than without access to social media sites. The average person's list of essential daily comforts now includes technology. Because now we heavily rely on wifi to have comfort, enjoy luxuries, and feel connected.

So who made this all-encompassing connectivity available? - No less than someone who was once called the world's most beautiful woman!

Yes, let us meet Hedy Lamarr, the beautiful, sultry actress, the original "bombshell." Improbable? Not in the least.‍

Lamarr was a world-famous actress and a self-taught inventor who created the technology that became the foundation for today's wifi, GPS, and Bluetooth communication systems.

Her father, a bank director and a curious man who inspired Lamarr to see the world with open eyes, lavished her with attention. She was an only child.

He would frequently take her on long walks while explaining the inner workings of various machines, such as the printing press or streetcars.

These conversations shaped Lamarr's thinking, and she could be found disassembling and reassembling her music box at the age of five to figure out how it worked.

Meanwhile, Lamarr's mother, a concert pianist, enrolled her in ballet and piano lessons. Max Reinhardt discovered Hedy at the age of 16. She then went to Berlin with Reinhardt to study acting and earned her first role in the German film Geld auf der Strae ("Money on the Street") by 1930. When Lamarr began her film career, her beauty took center stage, and sadly, ignored her brilliant mind.‍

Getting Ahead in Showbusiness

She received international acclaim as the lead in Ecstasy in 1933. Despite her excellent performance, the film contained explicit content such as nudity, earning her a reputation that she never seemed to shake.

During this time, Hedy married her first husband, Freidrich Mandl. Mandl was a weapons manufacturer. A very wealthy Austrian who hobnobbed with the powers at that time. He often hosted dinner parties with the world's powerful, including Adolph Hitler and Benito Mussolini.

As Freidrich Mandl's wife, Hedy gained access to secret intelligence. Listening to the men talking during dinner, she understood the type of military technology these men use, and thus her idea for the frequency hopping signal started to take seed.

However, her marriage to Mandl was unhappy and short-lived, and she ran away from him. Lamarr met Louis Mayer, a famous Hollywood executive, in London. Shortly after that, she secures a contract with MGM and moves to Hollywood. ‍

While Hedy was under contract with MGM, she became one of Hollywood's top leading ladies. Among her leading men were the bigwigs, including Charles Boyer and Clark Gable.

But Hedy Lamarr wasn't fulfilled by living solely as a goddess symbol and a famous actress. Hollywood wanted her dolled up, but her intelligent mind wouldn't allow herself to be suppressed for all time.

As the United States got involved in World War II, she decided she couldn't just stand by. She decided to test the ideas that formed in her mind learning arms talks during her marriage to Mandl to help the war effort.

Hedy Lamarr is often heard saying that improving things comes naturally to her. Her mechanism of switching from entertainer to entertained is through inventing. Her mind was always teeming with infinite possibilities.

She always used to love to learn new things and improve existing ones by redesigning them, making things excellent, or advancing them.

Aviation tycoon Howard Hughes, one of Hedy's boyfriends, was astounded by her creativity and intelligence. He was among the few who respected this side of hers and decided to utilize her brilliant mind.

Hughes introduced her to his team of scientists to improve his airplanes. Lamarr works wherever and whenever inspiration strikes her. Whether from her movie set trailer, her home lab, or Howard Hugh's aviation lab, Lamarr was passionate about creating an economical and speedier airplane wing design for Howard Hughes.

After studying and analyzing the speediest birds and fish forms, she finally presented Hugh with the swept wing.

In 1940, while attending a dinner party, Hedy met the self-proclaimed "bad boy," the composer George Antheil. The two hit it off right away, and in their discussion, Lamarr confided to George how disturbed she was about the news of the tragic sinking of the SS City of Benares.

While the SS City of Benares was heading to safety from England to Canada, an enemy torpedo hit the ship. Out of the 90 people on board, 77 perished.

Hedy and George bonded, and soon after, they worked together to develop a wireless communication system that stopped enemies from blocking, or "jamming," the signal that controlled the Allies' torpedoes.

Lamarr contributed to the concept of frequency hopping. At the same time, Antheil used his experience with "Ballet Mécanique" and sixteen player pianos to devise a method of synchronizing the fast-changing radio frequencies foreseen by Lamarr. Their joint invention used a mechanism akin to piano player rolls to synchronize the progression between the 88 frequencies.

The invention was dubbed "frequency hopping" because the system caused radio waves from the transmitter and receiver to switch to a new frequency simultaneously. Hopping between frequencies made it impossible to detect and redirect incoming signals, causing an enemy torpedo to miss its target. This also prevented radio waves from being intercepted, allowing the allies torpedo to find its intended target.

Lamarr and Antheil sought a patent and military backing for the invention following its creation. Heddy and George applied for a patent on June 10, 1941, and it was granted on August 11, 1942.

The military took Lamarr and Antheil's idea and eventually used it. Lamarr desired to join the National Inventors Council. Still, NIC member Charles F. Kettering and others reportedly told her that she would make a more significant contribution to the war effort as a pinup than as an inventor, entertaining troops, pushing war bonds, and selling kisses. She agreed, wanting to help in any way she could, and raised $25 million.‍

Hedy Lamarr once said, "All creative people want to do the unexpected." And her inventions exemplify this statement.

During her lifetime, she devised ideas for a shower chair that rotated in and out of the shower, a better traffic light, a tablet that carbonated drinks, and a fluorescent dog collar.‍

The Long Road to a Proper Legacy‍

Even though she lived in an age where women had to choose between being beautiful or intelligent, Hedy Lamarr bravely chose both. Although she didn't receive the recognition she deserved for her innovative mind while she was alive, her legacy has shifted in recent years.

In 1997, Hedy and her co-inventor of frequency hopping, Antheil, were bestowed the Electronic Frontier Foundation's Pioneer Award (EFF).

Furthermore, Bombshell: The Hedy Lamarr Story (2017) highlighted her significant contributions to modern technology. Since then, articles from Forbes, the Smithsonian, Biography, PBS, and The New York Times have contributed to reshaping how people remember and honor Lamarr.

Not her movies. Not as a bombshell. But her brilliant mind. Vastly overlooked because of her ethereal beauty, her innovative, inquisitive mind gave more to the world than any other single invention to this day.

Imagine if she succumbed to just being one of the most beautiful women in the world? Would there be internet/wifi today?

Lamarr's greatest legacy is the enjoyment, comfort, connectivity, and luxury the present-day life affords us because of the internet/wifi.

In 1960, Hedy Lamarr received a star on the Hollywood Walk of Fame. Lamarr was the very first female to receive the BULBIE GNASS Spirit of Achievement Award from the Invention Convention, known as the "Oscars of Inventing."

The Austrian Association of Patent Holders and Inventors awarded Lamarr the Viktor Kaplan Medal. The Hedy-Lamarr-Weg, named after the actress, was established in Vienna Meidling (12th District) in 2006. The IQOQI installed a quantum telescope named after Lamarr on the roof of the University of Vienna in 2013.

Lamarr remained committed to doing good even when the world was cruel to her. Lamarr embodies the "Think Big Anyhow" mindset, as revealed in her favorite poem, "The Paradoxical Commandments," which Lamarr loved to read to her children before bedtime.

Now that her story has come to light, she is a source of motivation for young women in science and technology. Years after her death, her tenacity and drive for change and innovation inspire people to pursue their passions to make the world a better place.

Lamarr is a role model for intelligence, ingenuity, and invention. Her story transcends age and geography, captivating scientists all over the world. Sadly, people tend to recognize true genius only after the person has passed away.

So, if you're reading this article on a smartphone or computer hooked up to wifi, take a moment to salute the woman that made this feat possible.