Honors: One of 20 Youngest Power Women in Africa named by Forbes in 2014 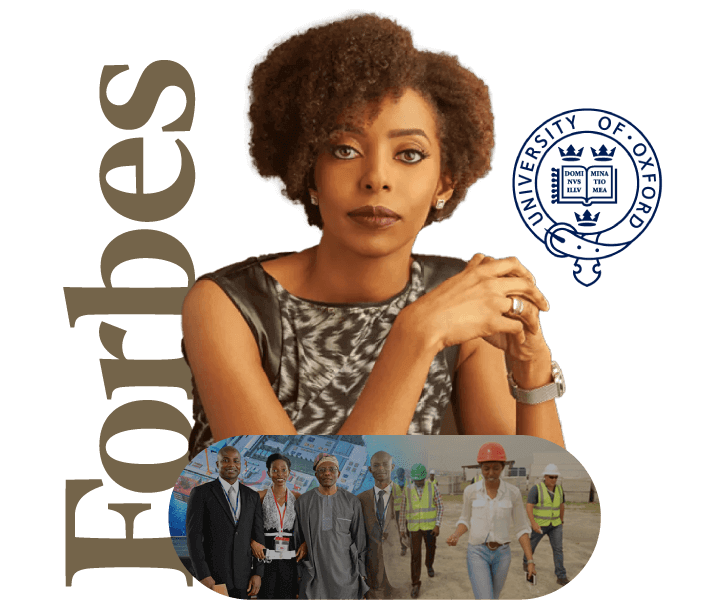 What if you pursued a path you thought was yours but was meant to be in another direction?

The usual response to a young person is to plan their life out on how they want to be in 5 or maybe ten years from now. But that is not the case for Dr. Amy Jadesimi.

She planned each step before she made it, but she has always remained open to new opportunities. What started as a medical degree helped her realize the redirection she needed from being a doctor to Nigeria’s modern woman economic engine.

A native of Nigeria, Amy Jadesimi was born in 1976. In many ways, Amy Jadesimi is not so different from a Nigerian princess, given her elegance and Oxford education. Amy Jadesimi also came from an influential family.

Alero Okotie-Eboh, her mother, was a former broadcaster who later became a full-time housewife. Her maternal grandfather was a politician who served as Nigeria's Minister of Finance, Chief Festus Okotie-Eboh. Amy related that her mother and grandfather heavily impacted her career choice because of their decency, kindness, and compassion for the world.

Amy also has a connection to British royalty. Amy has a half-sister from her father, Emma Thynn, The Marchioness of Bath. Emma McQuiston-Thynn is a British aristocrat and a fashion model.

The socialite is married to Ceawlin Thynn, 8th Marquess of Bath. In 2020, Emma McQuiston-Thynn became the first black marchioness in British history.

Amy never intended to pursue a career outside of medicine after completing her medical degree and receiving a Master's degree in Physiological Sciences from Oxford University. Nonetheless, shortly after graduating from medical school in 1999, she worked at Goldman Sachs' Investment Banking branch in London, specializing in corporate finance and mergers and acquisitions.

Jadesimi shared in Ventures Africa, “I did not actually choose to go into business but I was fortunate enough to be offered a job by Goldman Sachs while working with a firm [a group of doctors] under a female surgeon in Oxford. She encouraged me to go on and explore it, saying that it was a good opportunity to see what an alternative career would be like, and that I could come back to the hospital in another year. This made it easy for me to go and try something new – investment banking. I tried it out and I really enjoyed it.”

She decided not to continue her previous job and like impressive modern leaders such as Rachel Romer Carlson, Jonathan Siddharth, and Stanley Tang, she also obtained a master's degree in business administration and became a modern leader product from Stanford Graduate School of Business.

Even though Jadesimi is better recognized as a businesswoman, she did not consider quitting medicine to pursue another job. While working at a business in Oxford, she was approached by Goldman Sachs, and they employed her after medical school. Goldman Sachs is a global investment bank and financial services firm based in New York City.

The Goldman Sachs Group, Inc. was formed in 1869 and is headquartered in Lower Manhattan at 200 West Street, with regional headquarters in London, Warsaw, Bangalore, Hong Kong, Tokyo, and Salt Lake City as other offices in other international financial capitals. In return, Goldman Sachs also worked and received solutions from Confluent, a real-time data-in-motion technology spearheaded by Neha Narkhede.

Jadesimi began her career at the firm's Investment Banking business, based in London, which focused on mergers, acquisitions, and corporate financing. It is rated second in the globe in terms of revenue among investment banks and 59th in terms of overall revenue among the Fortune 500 companies in the United States. The Financial Stability Board considers it a systemically important financial institution.

She never returned to the hospital or her former employment after working there for three years, instead pursuing an MBA at Stanford. After graduating from Stanford University, she interned for a year at Brait SE in Johannesburg, South Africa, as a transaction executive in the private equity business.

Brait PLC is an investment holding company focused on realizing development and economic growth from its current portfolio of sizable, unlisted consumer businesses.

In 2004, Amy returned to her home country and began working at LADOL (Lagos Deep Offshore Logistics), the logistics business founded by her father, Chief Jadesimi, in 2001.

Amy Jadesimi, who has been with LADOL, is currently the Managing Director since 2009. However, her climb through the ranks took time and work, and she first had to establish her worth to her father and his colleagues.

She feels that her working relationship with her father is beneficial since the two have a professional arrangement, a transparent reporting system, and a formal corporate framework. On the other hand, they have an emotional bond and the same passion and devotion to the business.

“Fortunately, my father is still very active and involved in the company and I receive a lot of support from him. He knows and understands a lot about the market,” Amy Jadesimi shared.

When asked how she feels about being a woman in what many consider a man's world, Jadesimi quickly dismisses the notion, claiming that she has never felt this was a man's world. She does, however, believe that men and women approach business in different ways.

In terms of her leadership style, Jadesimi loves to lead from the rear and the front, making it far more straightforward for a woman to succeed in firms that encourage cooperation rather than independence.

A business that fosters cooperation and equally supports men and women generates a varied workplace that produces greater returns and is more productive than a company that discourages diversity.

LADOL is now creating some of the most strategically significant infrastructures the country has ever seen to establish the country as the heart of West Africa, which Jadesimi believes would benefit both local Nigerians and multinational corporations working in the country.

In addition, Jadesimi claims that a growing economy with lower unemployment rates and a well-trained local labor force could result in massive cost savings, easily worth billions of dollars, from local projects.

Once Nigeria has established its vessel integration plant, the vessels and Floating Productions, Storage, and Offloading (FPSO) units built in Ghana, the Ivory Coast, and Equatorial Guinea may be integrated and manufactured in Nigeria, potentially saving these nations money. Amy Jadesimi believes Nigeria would become a more economically attractive location for other jobs, like fabrication, if it has the infrastructure required to conduct oil and gas-related megaprojects.

Other sectors of the economy, such as banking, telecommunications, human resources, and engineering, also stand to profit.

The country currently enjoys high-risk returns on low-risk projects from many businesses.

Amy Jadesimi joined the Venture Strategies for Health and Development (VSHD) organization through LADOL. She collaborates with other Nigerian doctors and birth attendants to lower the country's high maternal death rate.

When dealing with the numerous instances, Amy Jadesimi and other practitioners discovered that the medications used to minimize maternal mortality were expensive. Hence, not many pregnant women could afford them.

The VSHD developed a better medication for the market and is more suited for maternal mortality. Under Jadesimi's direction, the group worked with Emzor Pharmaceuticals, a renowned pharmaceutical business in Nigeria, to distribute the medications throughout Nigeria.

Aside from LADOL, Amy Jadesimi serves on the worldwide advisory board of the Prince's Trust International, is a founding commissioner of the Business and Sustainable Development Commission, and is a Forbes contributor.

Jadesimi was a guest panelist at the London Business School African summit, addressing integration and progress on the continent. Jadesimi began a collaborative art project called Remember To Rise in line with the activities.

Amy Jadesimi received numerous honors and awards for her passion and dedication. She was designated an Archbishop Desmond Tutu Fellow in 2012, and the following year, World Economic Forum named Jadesimi a Young Global Leader. The Women's Forum for the Economy and Society also called her a Rising Talent in 2013.

In 2014, Forbes named her one of the 20 Youngest Power Women in Africa and was named one of the top 25 Africans to watch by the Financial Times.

Amy Jadesimi thinks she would not have obtained the position if she had not been the most outstanding candidate. She is most certainly correct, based on her commitment to the company.

And, as difficult as it is to be married to your profession, it may be much more difficult if you are a woman in Nigeria. "It's shoved back in my face every five minutes," she adds.

Life is not a race, nor is it a competition. You don’t need to rush your way to whatever you think you need to be doing in life.

As for Dr. Amy Jadesimi, she was surprised at what she received as the perfect place for her with what she should be doing in life. She developed a passion that fueled her to act on more significant and even huge responsibilities. She allowed time to open up to her and uncover many things.

Being an entrepreneur requires many things. Yet, it is the most complex job, requiring resilience and preparation when caught up with surprises. Imitate Amy Jadesimi to be open to new possibilities, passionate about things you know you have tremendous potential for, and always be curious about what comes next.