Mark Pincus: The Pioneer of the Social Gaming Industry

Honors: The Crunchies Technology Awards 2010 Founder of the Year 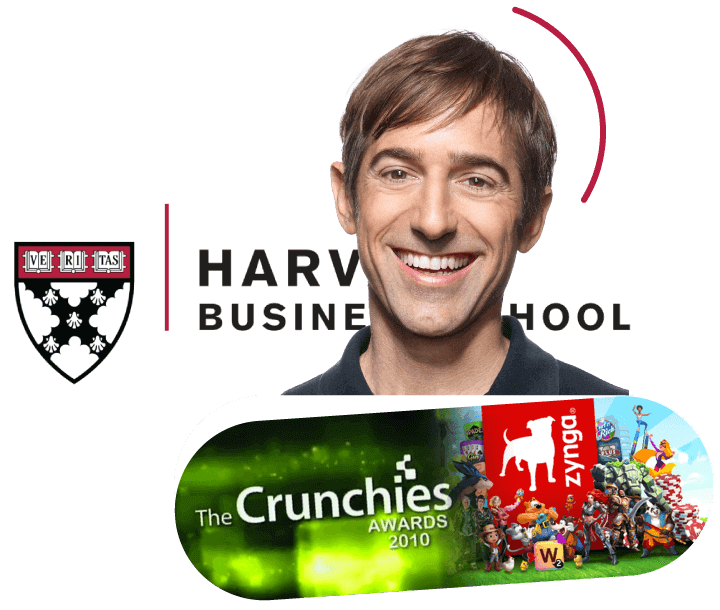 One example that our parents frequently cite is a well-known proverb from successful people. Parents often use the expression with young children who have no concept of money or value.

The only way to obtain this is to work hard to earn it or be fortunate enough to receive it as a gift. Either way, you must spend it wisely because the quantity is limited.

Though all is true, sometimes you must look at it from a different perspective. We are now in the age where we can pick money from trees, but we can plant our own money tree–an internet treasure.

One man made it happen by becoming the pioneer of the social gaming industry, Mark Pincus. He is an American Internet entrepreneur and founder of Zynga, a mobile social gaming company.

On February 13, 1966, Mark Jonathan Pincus was born and raised in Chicago into a Jewish family. His father, Theodore Pincus, was a business columnist and public relations adviser to CEOs and politicians, while his mother, Donna Forman Pincus, was an artist and architect.

Mark Pincus grew up in the Lincoln Park neighborhood on Chicago's North Side. Lincoln Park is only two miles from the Magnificent Mile and the hustle and bustle of downtown Chicago. It also shares an eastern boundary with Lake Michigan. It is one of Chicago's most wealthy neighborhoods, with a population of 68,697 people.

Because of Mark Pincus’ parents, he was given the education that contributed to his later career.

Pincus graduated in 1984 from Francis W. Parker School, where he attended kindergarten through 12th grade.

Like Hamet Watt, start-up powerhouse and investor,  Mark Pincus spent six years in venture capital and financial services before becoming an entrepreneur. After graduating from Wharton, Pincus worked for Lazard Freres & Co. as an analyst in the New Media Group for two years.

Following that, he relocated to Hong Kong, where he worked at Asian Capital Partners for two years as a Vice President. He returned to the United States to study at Harvard Business School (HBS), where he was classmates with Chris Hohn, Guy Spier, and Chris Shumway. He graduated in 1993 and worked for Bain & Company for a summer in 1992.

After graduating from Harvard Business School, Pincus worked as a corporate development manager at Tele-Communications, Inc., now AT&T Cable. A year later, he became a vice president at Columbia Capital, overseeing investments in new media and software firms in Washington, DC, for one year.

Pincus started his first company, Freeloader, Inc., in 1995. Fred Wilson and Softbank provided funding for Freeloader. Individual, Inc. bought $38 million for the company seven months after its founding. When Sean Parker was 14, he worked as a summer intern at Freeloader. He eventually co-founded Napster, and with a $100,000 investment, Pincus became the company's first investor.

In August 1997, he launched his second company, Support.com. Pincus turned the enterprise into a major help desk automation software provider as Chairman and CEO. In July 2000, the business went public with a $1.5 billion value. The company's name was changed from Support.com to SupportSoft, Inc. in 2002.

In July 2007, Pincus started his fourth business, Zynga Inc. and found success in the world of gaming like Maru Nihoniho, CEO of Metia Interactive. Zynga created games on social networks, including Facebook, Myspace, and Bebo.

Pincus brought the firm public in 2011 with a $1 billion IPO. From 2007 through 2013, Pincus was the CEO of Zynga. On July 1, 2013, Zynga hired Don Mattrick, the former head of Microsoft's Interactive Entertainment Business, to succeed Pincus as CEO.

In April 2015, Mark Pincus returned to Zynga as CEO. On March 7, 2016, Mark stepped down as CEO but remained with Zynga as Executive Chairman of the Board, with Frank Gibeau serving as CEO. In 2018, expressing his trust in Zynga's management, Pincus voluntarily decreased his voting rights in the company from 70% to 10% and resigned as non-executive chairman.

Forbes published an article detailing the experience of Kostadis Roussos, Zynga Chief Engineer, and how he is impressed with the leadership, good team, and the technology Zynga brings to the company.

Following Donald Trump's election to the presidency of the United States in 2017, During his presidency, Pincus, Werbach, and Hoffman co-founded Win the Future, a "nonpartisan project lab studying and creating strategies to offer the American voter greater voice and choice."

Pincus co-founded Reinvent Capital, an investment business in the internet, software, and media companies, with Reid Hoffman and Michael Thompson in 2018.

Pincus formerly served on the board of the Presidio Trust, a federal body that manages and runs the Presidio as part of the Golden Gate Recreation Area. President Barack Obama appointed him to the board in 2017.

Pincus founded Zynga.org in October 2009 to " transform the world via virtual social products." Zynga.org has subsequently collected more than $20 million for more than 50 worldwide NGOs by selling virtual goods for humanitarian purposes.

During his tenure at Zynga, Pincus developed features for numerous gaming sites that enabled gamers to give to the San Francisco Society for the Prevention of Cruelty to Animals (SPCA) and two Haitian groups, FATEM and Fonkoze, generating $427,000 in less than three weeks in October 2009. Zynga.org raised $1.5 million in five days for Haiti earthquake assistance in January 2010.

The funds were distributed in only two days. Zynga.org raised $3 million for earthquake relief in Haiti in 2010. In 2011, they donated an additional $2 million for relief operations in Japan following the devastating earthquake and tsunami.

On March 11, 2011, Zynga stated that all virtual goods purchases from more than seven games would benefit Japan's Save the Children Earthquake Emergency Fund. During the 2012 Christmas season, Zynga.org collaborated with Toys for Tots in its largest non-disaster relief humanitarian drive. The campaign raised $750,000, with Toys for Tots receiving 100% of the purchase price of select virtual products.

In June 2020, Zynga announced the creation of a $25 million fund to invest in philanthropic initiatives and educational institutions that promote diversity and inclusion.

Pincus gave $700,000 to the Oakland Unified School District and the City of Oakland in May 2020 to help them accomplish their $12.5 million objectives of closing the city's digital divide.

Pincus contributed $3 million to Roden Crater, a large-scale Land artwork by James Turrell under a dormant volcano in Northern Arizona's Painted Desert area, in February 2020. The contributions put the project, which the artist expects to open within the next five years, closer to completion.

Finnish entrepreneur Jyri Engeström, biotech executive Cyrus Harmon, and Pincus coordinated and funded community-wide COVID-19 testing in Bolinas, California, in April 2020. It was one of the earliest community-wide testings in the United States. Bolinas was able to test all of its 1,600 citizens for COVID-19 for free because of their efforts. Pincus contributed the initial $100,000 to the action, which the government did not fund.

Pincus has long been a fan of Kamala Harris, and in 2016 she co-hosted a fundraiser for her candidacy.

Awards and Honors of Mark Pincus

Mark Pincus is known for being one of the most successful and innovative entrepreneurs in the IT industry.

He was recognized as the CEO of the Year in 2009 at The Crunchies Technology Awards.

In 2010, Mark Pincus was named Founder of the Year at The Crunchies Technology Awards.

Mark Pincus married Alison Gelb in 2008, and together they launched One Kings Lane, a furniture and home goods e-commerce online store that Bed Bath & Beyond acquired in 2016. They have three children, twin girls and a boy, living in San Francisco's Pacific Heights area. The couple divorced in March of 2017.

Making money in the 21st century is getting more competitive and innovative.

A single thought you think is impossible could be the next big thing in the next ten years. It takes real grit and passion for materializing a career, work, and the source of your money tree.

Reflecting on the success of Stanley Tang, Andrew Kortina and Mark Pincus–innovation is the new currency. It takes an idea, good or bad, to turn it into a great idea.

Imitate Mark Pincus on how he planted his money tree by understanding his advice for entrepreneurs.