Neha Narkhede: The Brain Behind Real-Time Data in Motion Ecosystems

Recognition: Received the Oracle Groundbreaker Award at the Oracle Code One conference in San Francisco 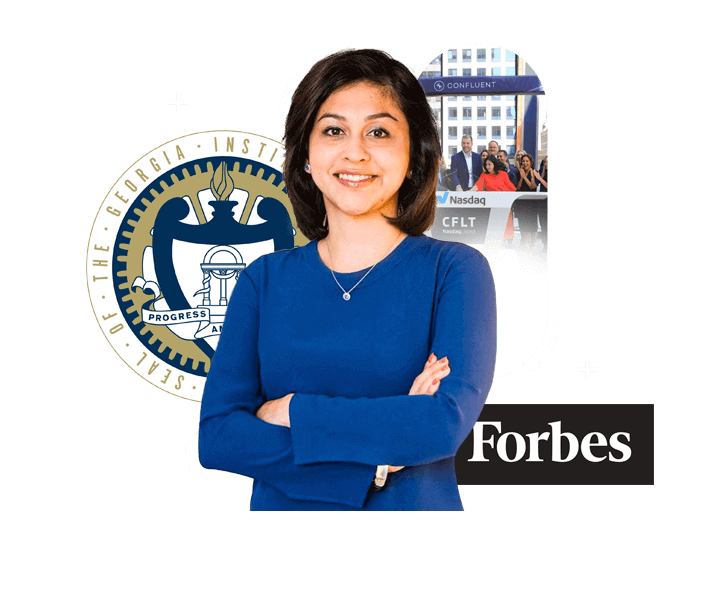 Daring to Be Different

Who run the world? Girls!

While this statement could be true, no man or rather, woman is an island. It doesn’t mean that being a girl means braving all the challenges alone; you can run the world in a male-dominated industry with a team of brilliant men.

Neha Narkhede happens to embody the quote: “teamwork makes the dream work.” She dared to be different but not too different to work with her team.

But who is this daring founder we are featuring?

Neha Narkhede was born and raised in Pune, India. Pune is a sprawling city located in Maharashtra state in western India.

This city is regarded as India's second-largest IT city and the country's most important auto and manufacturing center. Because of the presence of several academic institutions, it is often known as the "Oxford of the East."

During an episode of Behind the Tech with Kevin Scott, Narkhede talked about her love of all things tech:

From the start, Neha was fascinated with computers. She started owning a computer when she was eight years old and spent a lot of time on her computer. As a result, she used to play video games and paint in MS Paint, among other things.

Pune, India, was Neha Narkhede’s home before moving to the US for her education.

Neha Narkhede earned a Bachelor of Science in engineering from the Pune Institute of Computer Technology (PICT), based at the University of Pune.

In 2007, Neha Narkhede earned a master's degree in technology from Georgia Tech.

Neha Narkhede began her first employment as a principal software engineer at Oracle after earning her Master's degree.

Oracle Corporation is a global computer technology company based in Austin, Texas. Best recognized for its software and services, Oracle delivers cloud-engineering services and systems and database management solutions through its four primary business segments: hardware, services, cloud, and license.

Its mission is to help people discover insights, unlock endless possibilities, and find new ways to view data. After leaving Oracle, she worked at LinkedIn as the lead of streams infrastructure.

In 2011, while working at LinkedIn, Narkhede co-founded the Platform Apache Kafka alongside Jun Rao and Jay Kreps. They devised the idea while working on a commercial project and built Kafka as an open-source platform.

Exploring the Kafka founders, Neha Narkhede is the genius behind this groundbreaking idea in Apache Kafka. Jay Kreps and Jun Rao’s career history will lead to it’s Confluent’s birth.

Jay Kreps was the principal architect for data infrastructure at LinkedIn before launching Confluent. He is a co-founder of various open source projects, including Project Voldemort (a key-value store), Apache Kafka (a distributed streaming platform), and Apache Samza (a stream processing system).

On the other hand, Jun Rao was a senior staff engineer at LinkedIn before joining Confluent, where he managed the development of Kafka.

Narkhede recognized a tremendous opportunity with Kafka and persuaded her fellow Kafka co-creators to launch Confluent as a B2B infrastructure service. Kafka's event streaming was utilized by 60% of Fortune 100 companies.

Neha Narkhede founded Confluent still with her two LinkedIn coworkers and Kafka authors, Jay Kreps and Jun Rao, in 2014 to assist organizations in adopting the technology. Confluent, the Palo Alto, California-based business behind the famous Apache Kafka streaming infrastructure, is co-founded and led by Jay Kreps as CEO.

Confluent provides solutions for firms like Goldman Sachs, Netflix, and Uber, leveraging the Apache Kafka platform, which had been open source three years before. Neha later became the Chief Product Officer until 2020. She currently serves on the board of directors.

Neha Narkhede spends a lot of time evangelizing for Confluent. Based on their team's technologies, Neha recently co-wrote the book Kafka: The Definitive Guide with Gwen Shapira and Todd Palino.

Gwen Shapira is the author of Kafka: The Definitive Guide and Hadoop Application Architectures and a regular conference presenter. Gwen is a product manager for Confluent. She has more than 15 years of experience working with code and clients to create scalable data architectures that integrate relational and big data technologies.

She is an Apache Kafka PMC member and an Apache Sqoop committer. Shapira may be found on her bike exploring the roads and trails of California and beyond when she isn't designing data pipelines or dreaming up new features.

While Todd Palino works at LinkedIn as a Principal Staff Engineer in Site Reliability, handling the problems of managing capacity and efficiency across the platform. Palino’s role enables him to take a strategic idea of what is going on with LinkedIn's systems and what is planned for them.

As one of the technical leads, Todd pushed the overall strategy of capacity testing for live applications and collaborated with their Data Infrastructure teams to understand the particular requirements of their stateful systems. Todd Palino has also strongly supported both Kafka and site reliability, presenting at conferences worldwide.

Neha Narkhede is now devoting more effort to other types of evangelism because writing the guidebook required a significant amount of time. Throughout the year, she delivers keynote addresses at conferences and publishes blog entries to reach a wider audience instantly.

At conferences, Narkhede appreciates meeting female engineers. She only hopes that her appearances on stage to speak about their technology inspire other female engineers to engage in more public speaking.

Narkhede and her Confluent team secured $125 million from Sequoia Capital in January 2019, increasing their total financing to $206 million.

Thanks to her engineering expertise and entrepreneurial zeal, Neha Narkhede is the chief technology officer (leading the engineering process). The $388 million (revenues) business went public in June 2021 at a $9.1 billion value; the Narkhede family owns around 8%.

In 2017, MIT Technology Review named her one of the Top Innovators Under 35. The following year, Forbes listed Narkhede as one of the top 50 Women in Tech in America and the world. She received the Oracle Groundbreaker Award at the Oracle Code One conference in San Francisco.

1. What does Confluent mean?

In Merriam-Webster Dictionary, it means flowing or coming together.

2. When was Confluent founded?

Confluent was founded in 2014.

3. Who are the 3 Confluent founders?

4. Who is Confluent CEO?

5. Who is Confluent CTO?

6. Where did Neha Narkhede finish her education?

In 2007, Georgia Tech granted Neha Narkhede education with a master’s degree in technology.

7. How much is Neha Narkhede’s net worth?

8. Who is Neha Narkhede’s husband?

9. What is Apache Kafka used for?

Data in motion describes any digital information in motion from one location to another. Alternatively, it is called data in transit or data in flight. As soon as the data is contained in one place, it becomes data at rest.

Neha Narkhede loves to travel, and she is an avid scuba diver. She and her husband, Sachin Kulkarni, created a bucket list of amazing places to dive around the world.

Belize's Great Blue Hole was one of the last cool places they visited. Seeing so many sharks around made it an adrenaline rush.

No man is an island indeed!

Teamwork indeed makes the dream work. Neha’s ideas were made possible along with great co-workers who showed the same vision and passion for what she is achieving.

Although Neha is a female in a male-dominated industry, she did not let her gender do the talking. Her brain did all the work.

As an entrepreneur, keeping our eyes on the prize can be challenging. Sometimes, we lose our focus when outside factors sidetrack us.

Imitate Neha Narkhede to be committed to her work and dare always to stand out and be different. Question: how do you see yourself?