Success: CEO and Co-Founder of Affectiva 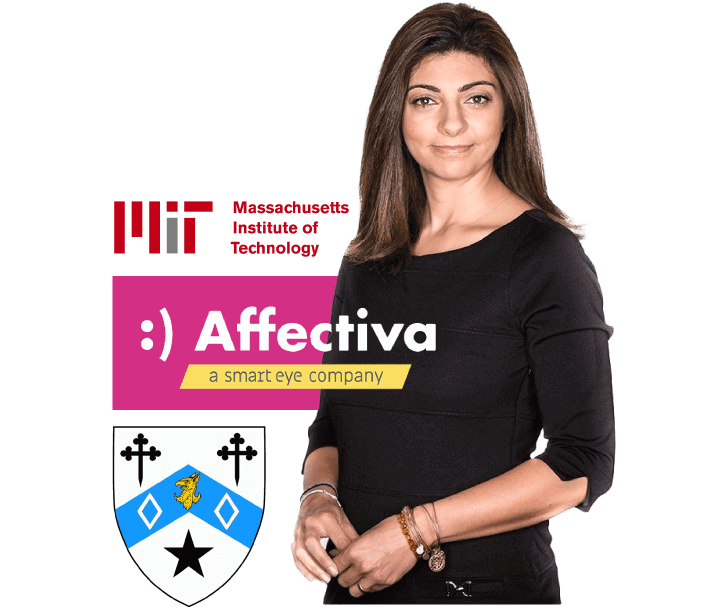 Imagine how clueless we would be about how others genuinely feel.

Just imagine a world with no affection, no real connection.

With the emergence of digital technology, this is slowly becoming a reality. Studies have found a strong connection between heavy social media use and depression, anxiety, loneliness, self-harm, and suicidal thoughts. It is not just the lack of communication but a lack of social and emotional connection.

The lack of emotional connection diminished face-to-face communication, and fake identities are some of the pitfalls of social media. Many individuals feel that posting photos on social media is an excellent way to stay in touch with friends and family. While this is correct, it lacks emotional resonance with others.

What if a computer could detect your facial expression and react accordingly to how you feel?

This is made possible by the Mother of Emotion Recognition Technology–Dr. Rana el Kaliouby. She is an Emotion AI pioneer, the next frontier of artificial intelligence.

She believed that AI with emotions is needed to break this harmful modern contact and devoted her career life to making it happen.

Born in 1978, Rana el Kaliouby grew up in Cairo, Egypt, to technologist parents. Her father was a pioneer in the field of technology. She said her parents met at a programming 101 class taught by her father.

Rana’s father got them an Atari and forced them to figure out how to use it. She was more interested in how video games brought all of them together as a family than in the device.

Her family influenced her career path, and she decided to become a computer scientist and later an entrepreneur.

Rana el Kaliouby earned both a bachelor's degree and a Master of Science degree from the American University in Cairo. Dr. Rana el Kaliouby then proceeded to get a Ph.D. at Newnham College, Cambridge.

Rana pioneered emotion technology through software expressions in several domains, including mental health and autism studies, where she was instrumental in establishing the Autism & Communication Technology Initiative.

A Book that Changed Rana's Life

Rana’s interest in the human aspect of technology grew while she pursued a degree in computer science. Rosalind Picard's book Affective Computing was one of the books el Kaliouby read.

Dr. el Kaliouby says if we want better computers, we need to develop machines that can recognize, interpret, and even convey emotions.

The book's author, Professor Rosalind Picard, proposed that for computers to be genuinely intelligent, they needed more than just cognitive or IQ; they also required emotional intelligence.

Realizing this concept would alter the course of Rana el Kaliouby’s profession and decided to devote her entire career to it.

Rana was part of a team at the MIT Media Lab's Affective Computing division that pioneered the creation of the emotional hearing aid, a pair of emotion-reading glasses named one of the New York Times' Top 100 breakthroughs of 2006.

Affectiva is working to humanize technology and bridge the gap between humans and machines. Affectiva emerged from the MIT Media Lab in 2009, founded by visionary scientists Dr. Rana el Kaliouby and Dr. Rosalind Picard. Emotion AI was conceived and defined by Affectiva, which evangelized its various applications across fields.

El Kaliouby’s first purpose was to improve human-computer connection. Still, she got enthralled by the prospect of using this technology to enhance human-human communication, particularly for autistic persons, who often have difficulty communicating their emotions.

El Kaliouby claims that while computers are excellent at processing data, they fall short in assessing emotions, needing manual prompting to respond to an operator's demands.

Her primary focus is on the tiny alterations people make to their faces. She has found 24 facial features that move in various ways depending on the emotion conveyed.

There are many applications for this emotion recognition software, from linguistics to video production. Autism patients, who have a wide range of emotions that deviate from the norm, may be able to monitor their moods more readily by parents or caregivers. Computer-generated imaging of faces (and, presumably, android projects) will be able to be more realistic in the art of subtlety for production reasons.

In the 2018 documentary Do You Trust This Computer?, Dr. Rana el Kaliouby displays her work and is interviewed about it.

In 2016, Dr. Rana el Kaliouby rose to become the Affectiva CEO. This company is recognized for establishing the science of Emotional AI and today works with 25% of Fortune 500 companies and is a leader in the industry.

Furthermore, Professor Shane Greenstein of Harvard Business School featured Affectiva’s Emotion AI  as a case study in the field of AI with emotions in November 2019.

In 2021, Smart Eye, the leader in AI-based eye-tracking, acquired Affectiva, the pioneer of Emotion AI and Human Perception AI. The supported Affectiva funding and newly unified business have created a worldwide AI powerhouse that will lead and expedite software development for automotive interior sensing, media analytics, human factors research, and other related areas.

Rana el Kaliouby is on a quest to humanize technology by building a deep learning platform that integrates facial expression with the tone of voice to infer how a person is feeling. Most artificial intelligence now focuses on imitating or exceeding human cognitive intelligence, but it seldom accounts for emotional intelligence.

"Emotional intelligence, or EQ, is a critical component of how people work," says Rana el Kaliouby, whose goal is to connect EQ and IQ to make emotion recognition AI technology and machines more emotionally intelligent.

The idea behind el Kaliouby's study is that computers may be trained to recognize and process human emotions through reading facial expressions, scanning body movements, and analyzing speech. Facial expressions, hand gestures, voice, and posture are examples of nonverbal communication. When we communicate online, much of this is lost.

Rana el Kaliouby, on the other hand, feels that an emotion detection device has more tremendous implications for how we live, work, and communicate.

In an online classroom, for example, an AI with feelings might assist professors in better determining how bored or interested their students are. Similarly, measuring emotional reactions — such as smiling or eye-rolling — as markers of an emotional or cognitive state might provide speakers at an event a clearer sense of how engaged their virtual audience is.

Because of this groundbreaking research, Dr. Rana el Kaliouby has been invited to Ted Talks multiple times in the US and Cairo showcasing the Smarteye app. Dr. Rana el Kaliouby’s Ted Talk has inspired many audience members to acknowledge emotional artificial intelligence.

Dr. Rana el Kaliouby is one of the many female tech entrepreneurs who is dominating a male-dominated industry. A few notable leaders are Maru Nihoniho, Neha Narkhede, Anne-Marie Imafidon, and Anita Schjøll Brede. All who are respected for their respective talents and whose contributions to technology have greatly shown an impact on the world.

Rana el Kaliouby was honored with the Women in Engineering Hall of Fame.

Rana el Kaliouby has also been recognized for her work, including:

Just like Ursula Burns, a great tech entrepreneur who released a memoir that can be compared to a rags-to-riches story, Rana also wrote a memoir and authored the book Girl Decoded: A scientist's quest to reclaim humanity by bringing emotional intelligence to technology in April 2020.

Rana's professional message rings true as she proclaims the benefits of computer algorithms that can deduce people's emotional states based on data collected from facial expressions and other nonverbal clues.

Rana el Kaliouby’s book is an enticing manifesto for Emotion AI but merely a good biography for readers. Both Rana el Kaliouby's and Ursula Burns’ books should be read for their inspiration.

El Kaliouby contributed a chapter to American futurist Martin Ford's 2018 book Architects of Intelligence: The Truth About AI from the People Building it.

Rana el Kaliouby was married and had two children with her then-husband. However, despite their best efforts to make the marriage work, as well as the location differences between Affectiva headquarters and her family’s permanent residence, Rana el Kaliouby and her husband decided to get a divorce. This prompted her permanent relocation to Boston.

‍“So I packed up my life and moved to the US with two young children in tow,” Rana recalls in an article published by inc.com. “Suddenly, I found myself a single mom in a foreign country, with a high-pressure career and my entire support system thousands of miles away.”

“For years, I was my own worst critic. It’s taken a divorce, a cross-continental move, and a lot of missteps to learn to co-exist with the voice in my head and to turn it into an empowering force.”

The gift of emotions is truly underrated. It is inside our feelings that make our life worthwhile.

Through our emotions, we process our experiences, shape our character, and make up our personality and identity.

Dr. Rana el Kaliouby is making sure that this should be the case for everyone while embracing modernity.

Sometimes, we think we know our purpose and what we are doing in life. But oftentimes, it is not the case.

A book that changed Rana’s life and a heart to change everyone’s lives.

We can imitate Dr. Rana el Kaliouby for her faith in change. Once she believes in something more significant, she is devoted to materializing it. Her devotion to human and emotional connection is worth imitating and learning.