Login
Get a Demo
Subscribe to our Weekly Update!
Resources /
Anna Bissell: America's First Female CEO Sweeping Up The Competition 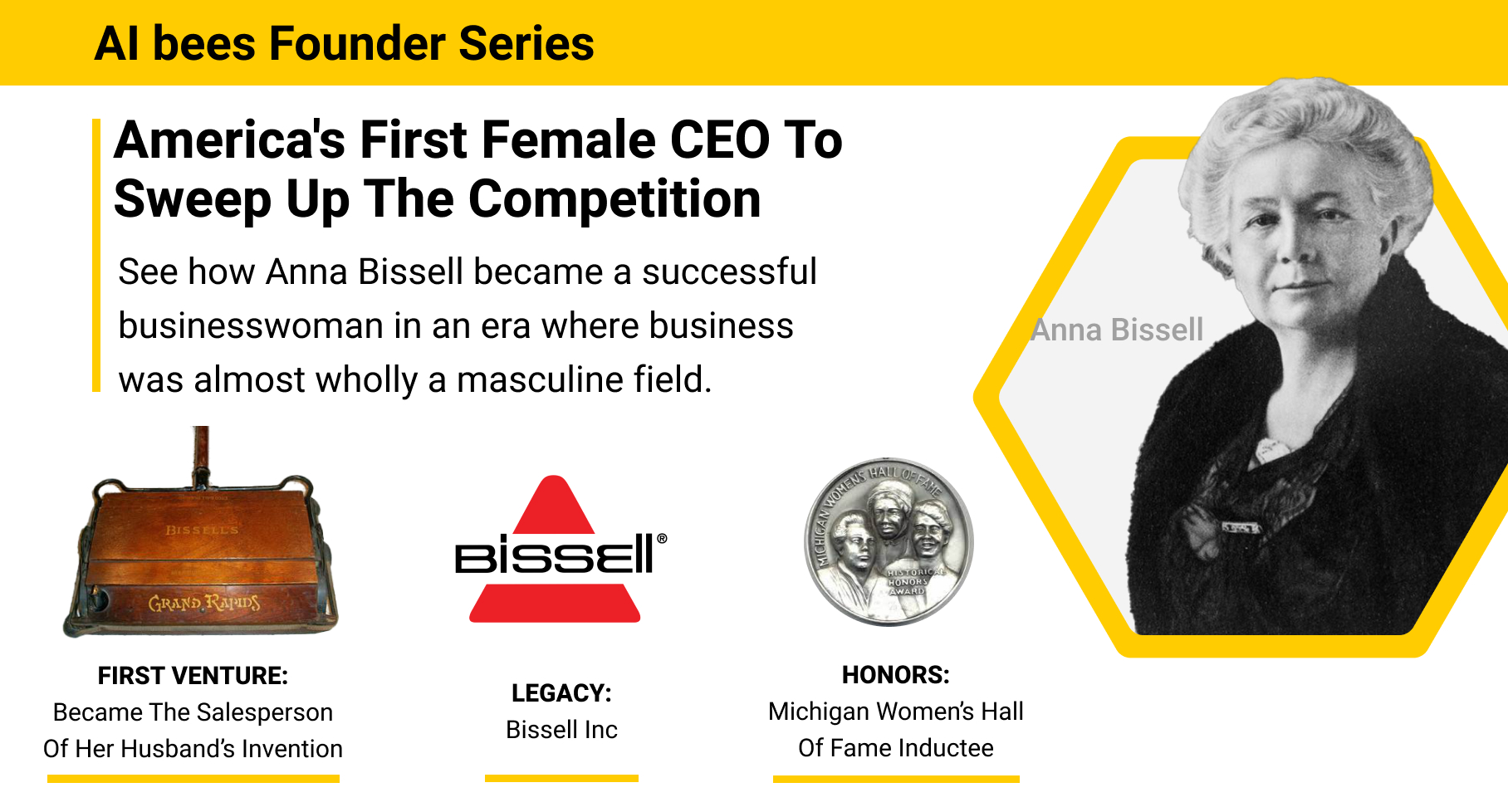 Anna Bissell was an ordinary woman in the 1800s. She grew up, got married, and supported her husband in his ventures.

Nothing serious, right? No. She was the real deal.

Anna was born in the fishing village of River John in Nova Scotia, Canada. On December 2, 1846, she became the newest family member of maritime captain William Sutherland and Eleanor Putnam Sutherland, his wife.

As a young girl, Anna and her family moved to Du Père in Wisconsin, and, like many immigrants to the USA at that time, her father settled with hopes of living the American dream.

Anna Bissell was educated in America and finished her schooling, aged sixteen. Wasting no time, she became a teacher immediately after graduating.

The young couple moved to Kalamazoo and, later, in 1871, to Grand Rapids in Michigan, searching for a greener pasture, and it was there that her life took a turn.

Anna and Melville had five children from the marriage; Anna Dotelle, Lillie May, Melville Reuben, Harvey, and Irving Joy.

Melville, Anna’s husband, was a porcelain and chinaware merchant like his dad before him.

But this crockery business, although wildly successful, was not what would make her name.

When Anna joined her husband’s business, she noticed that dust was always collecting on the office and home carpets whenever she opened any wares boxes. And that this dust was challenging to get off.

By the economic panic of 1873, Melville had made a fortune. Both in industry and real estate. He, as such, turned his attention to the problem of dust noticed by Anna and the potential large market it could have.

This led to her husband’s first invention. A carpet sweeper was invented and patented in 1876.

It was an enormous hand-pumped, expensive and noisy machine. The sweeper had components of hog hair rollers and a small canister.

The hog hair rollers would pick up tiny bits of dirt, then deposit this dirt into the canister.

This equipment was quite an improvement from the regular sweepers that were in existence then. It was fitted with rubber tires as rollers to make it even more efficient.

He noticed how effective and efficient the sweeper was and decided to market it. Anna thus became the carpet sweeper’s salesperson.

Her new job necessitated her traveling to neighboring towns to promote the new carpet sweeper. She first sold the product for $1.5. During her travels, she also solicited business orders and arranged the shipping of the carpet sweeper.

One of the businesses she persuaded to stock the carpet sweeper was Wanamakers, one of America’s first department stores. Being the salesperson, she always had to assemble the parts of the product during her demo with clients.

Her efficiency, after-sales service, general professional conduct, and customer care system created a vast market base for the product.

Given how well the sweeper was received, they decided to stop the crockery business and focus solely on producing the sweepers in bulk.

Thus in the early 1880s, the Bissell factory was built, and by 1883, the Bissell Company was officially founded.

A Series of Unfortunate Events

In 1844, Bissell’s factory was gutted by fire, where the carpet sweepers were made. Anna headed to the bank to get a loan. Given their booming business and glowing references, she was able to acquire the loan.

In three weeks, the factory was up and running again. But this was not the end of their woes.

Anna took over running the company as a widowed single-mother of five children, and that’s how she became the first female in America to head a registered company as its CEO.

Immediately after taking over as CEO, she secured trademarks and patents to prevent the privacy of the carpet sweepers. She, in addition, instituted marketing guidelines given her experience with generating sales.

A decade later, under her leadership, the Bissell Company became the largest manufacturer of carpet sweepers globally.

The company exported products to Latin America and Europe. In 1919, Anna became the President of the board. With this new position, she began an overhaul to modernize the company.

She instituted, in the company, novel fixed work hours and annual leaves for her employees. She also introduced the workman’s compensation policy, i.e., the restitution of payments to workers injured while on duty.

In addition to these policies, she created a pension plan to cater to employees’ upkeep after retirement from the company. From 1889 to 1919, Anna exhibited vast knowledge of the company’s business structure and market.

In an interview with IBD, Bissell company representatives said, “She possessed a successful combination of intelligence, logic, and intuition, and provided ethical leadership. Anna was an extremely caring person, not only as a business leader but within her community.”

And her diligence thrust the company into the international market. Her sweepers were very popular with women in the United States and abroad. In fact, the English Queen Victoria ordered that her palace be “Bisselled” every week.

As a result of the employee benefits she introduced and her personal touch in everything, she was seen as a mother figure to her workers. Anna Bissell’s business mind and entrepreneurial capabilities turned her to the pinnacle of benchmarking in the carpet sweeper industry.

It was once said that she studied business the way other women studied French.

Anna’s innovation was not relegated to the business world enough. She was quite an addition to society in terms of philanthropy. Anna Bissell not only donated but also participated in various charitable events.

She also served as a member of the Methodist Episcopal Church board and the Blodgett Children’s Home and Memorial Medical Center.

In addition to the above, she was active in social clubs focused on women’s empowerment. The Ladies Literary Club, Women’s City Club, Zonta, and the Clark Memorial Home, were all associations with which she was deeply involved.

She served on the executive committee of the Red Cross and supported the Union Benevolent Association. She founded the Bissell house in Grand Rapids in 1897.

This house was a center from which immigrants could be assimilated into society.

The Bissell House was providing recreational opportunities such as sports, drama, and music programs for the youths. It also offered training programs for women in business skills, arts, and gardening. The house, however, shut down in 1912.

Her impact was so felt in society that she was admitted into the National Hardware Men’s Association as the only female member.

End of an Era

Anna Sutherland Bissell died November 8, 1934, in Grand Rapids, Michigan. She is buried at Oakhill Cemetery, also in Michigan. She outlived her husband by 45 years. Till her death, she remained the chair of the company’s board.

At her death, she was acclaimed as “a successful businesswoman in an era when business was almost wholly a masculine field.” And newspapers said she was “a business executive without peer, a respected and beloved philanthropist, and a true matriarch in her family.”

She was honored by the Grand Rapids community with a statue in 2006.

The commemorative statue is located at DeVos Place, where she and her husband built the first factory in the 1800s. Her home in the city was also bought by WOOD-TV, a station owned by NBC television. She was inducted into the Michigan Women’s Hall of Fame in 1989.

Bissel Company changed its name, under Anna, to The Bissell Corp in 1923 and Bissell Inc., in 1959. Her carpet sweepers evolved into what we now know globally as vacuum cleaners.

Today, this company built by Anna and Melville is still functioning as a family business, run by the younger Bissell generation.

Bissell Inc. is the biggest brand in floor-care appliances based on sales, holding about 20% of the North American market share.

Bissell Inc’s SpotBot is the first portable deep cleanser specifically designed for pets. And under Cathy Bissell, CEO and wife to Anna’s descendant, Mark, the company supports the animal community.

Since its inception in 2011, the Bissell Pet Foundation has donated more than $2million towards efforts to protect dogs and cats. With its corporate headquarters in Grand Rapids, Michigan, the company is currently worth about $1bn with over 2500 employees.

Not bad for a merchant and a widow with five kids, huh?

One thing that stands out in Anna Bissell’s story is her willingness and diligence to learn.

Her daughter wrote in her book “Recollections of Anna Bissell McCay” that: “She took no small part in the early development of the business, traveled extensively in the company’s interest, and secured the first order John Wanamaker (department store) of Philadelphia ever gave for carpet sweepers. There was no detail of the business with which she was not familiar.”

This is a valuable lesson to entrepreneurs and leaders today. It’s not okay to know just one part of the business. Have knowledge of it all. That you delegate and have others working for you does not mean you should not have at least the most basic knowledge about the different facets of your business.

After all, knowledge is power. And Anna was one powerful woman.