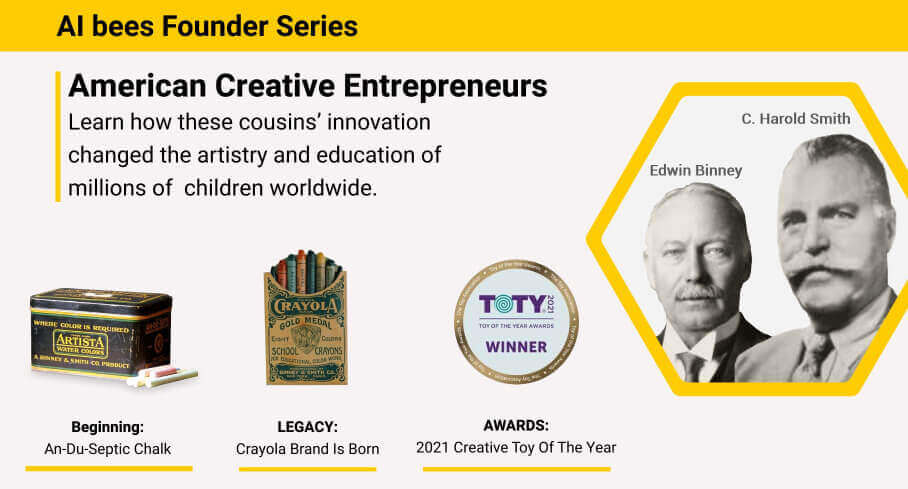 "I went outside the lines."

Almost everyone alive today used crayons to make their first colorful squiggles and utter the words above either to your primary school teachers or your parents.

But, did you know that in the early 1900s, a crayon was simply a stick of colored clay or chalk? It looked nice, but nothing happened when put down on paper – not a pretty picture.

The first people to establish a reputation for making high-quality crayons that were chemical-free and completely safe for children to use were Binney and Smith.

But, did you know that in the early 1900s, a crayon was simply a stick of colored clay or chalk? It looked nice, but nothing happened when put down on paper – not a pretty picture.

The first people to establish a reputation for making high-quality crayons that were chemical-free and completely safe for children to use were Binney and Smith.

Binney and Smith, now Crayola LLC, sprang out of a pigment-making chemical firm. The business was founded in 1864 in Peekskill, New York, by Joseph W. Binney. When he retired, his son and nephew took over the business and renamed it Binney & Smith.

Joseph Binney retired in 1885. Edwin and Harold were delighted to take over the company and renamed it Binney & Smith.

Schoolchildren had their own slates (little two-sided blackboards) around the turn of the twentieth century since paper was expensive and scarce. The pupils wrote on the tablets with slate pencils, and the softer the pencil, the better. (Slate pencil marks are remarkably similar to chalk marks and can be easily wiped away with a cotton cloth–or even a sleeve.)

Smith began listening for what else teachers wanted as Binney & Smith grew more familiar with the school market. Two requests resurfaced over and time again: dust-free chalk and inexpensive wax crayons for kids to use in their artwork.

At the 1904 World's Fair in St. Louis, the Binney & Smith chalk won a gold medal. It was well received by teachers, who were relieved to no longer have to use chalk that left a residue on their fingers.

Many firms entered the wax crayon industry before Binney & Smith, including pencil companies looking for a boost in sales. Because there were few national magazines in which to promote the educational market, each corporation had to carve out a niche for itself.

Edwin Binney tasked his chemists with developing a chemical-free crayon. Their latest crayon, "Stayonal (stay-on-all)," included ingredients that could not be handled by schoolchildren on a regular basis.

They were happy with their new product by 1903. That year, Binney and Smith released their first package of eight brightly colored crayons. Alice Binney, a former teacher, is credited with inventing the Crayola brand name, which was used to market the crayons. (In French, “craie” denotes chalk, and “ola” is a shortened variant of the word “oléagineux,” which means oily.)

The Crayola division kept expanding its product line. They eventually added colored pencils and markers, and the company now produces a wide range of craft supplies.

Crayons, on the other hand, have always been significant sellers. And they were aware of the growing interest in art instruction from the start (1903). They invented the Rubens-Crayola crayon for that more refined market.

The box was expanded to contain 48 colors in a box with "stadium seating" in 1949, and the famous 64-color box with a built-in sharpener was launched in 1958. The Big Box, which contained ninety-six hues, was introduced in 1993.

Binney and Smith are known for founding Binney and Smith, now Crayola LLC. The company produces the best-selling crayons at a rate of 650 per minute, with a daily output of up to 13.5 million in 400 distinct colors. The factory produces 3 billion Crayola crayons per year on average.

According to Hoover's, the corporation has annual revenues of $750 million.

This year, Crayola Crayons won the Creative Toy of the Year Awards

Crayola has a wealth of lessons that entrepreneurs, small businesses, and everyone may learn to pass with flying colors.

People who can go to the brink, look over for opportunity, and take it are the ones that build businesses. People who take risks have a higher chance of succeeding.

Keep an eye out for naysayers and people who have a negative attitude about you or your company, and ignore them. Customer feedback informs you whether your consumers are satisfied with the product or service you provide. Customers will grow disinterested in your services if they don't believe you are making an attempt to understand them. You can keep your finger on the pulse of your business by listening to customers.