Frederick Jones: Jack of Many Trades, Master to All

Be amazed with the life of Frederick Jones whose entrepreneurial spirit gave him 61 patents despite the lack of formal education and living in a segregated society.

Recognition: First African American to be included in the American Society of Refrigeration Engineers 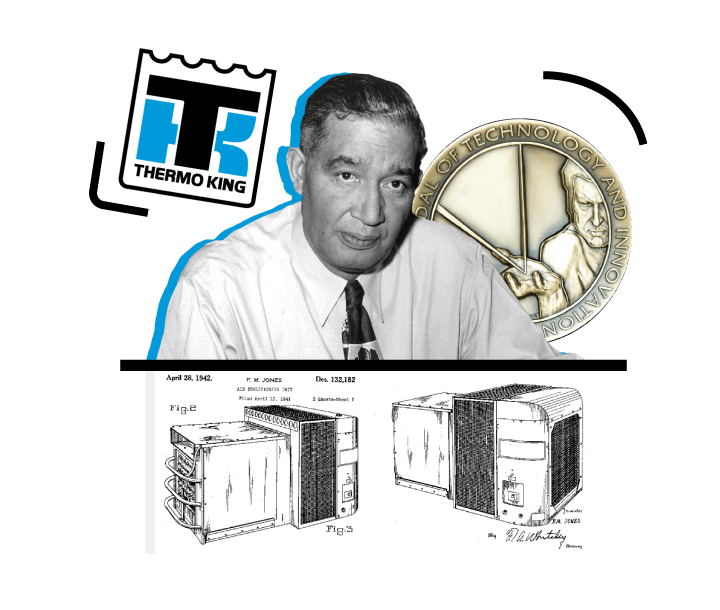 But have you ever heard of anyone who never went to high school but had over 60 patents under his name? - Meet Frederick McKinley Jones.‍

Frederick was born in Cincinnati, Ohio, in 1893 to an Irish father and African-American mother. His mother deserted him and later died. His father struggled to raise Frederick on his own, and at seven years old, left him to a local church priest in Kentucky.

After two years in the church, he got the news that his father had passed. It will take two more years until the restless young Frederick runs away from the church to fend for himself.‍

Eleven years old and with minimal education, Frederick went back to Cincinnati. He worked odd jobs, including being a janitor to a mechanic's garage. By age 14, he was already the garage's foreman and an A+ mechanic.

You would have to chalk this huge leap from Frederick never letting schooling interfere with his education. Frederick is self-taught and ambitious; he's an avid reader with a natural knack for tinkering with machines and is fearless in letting his curiosity take the wheel.

Although the same fearlessness got him fired from that job, he got caught racing cars during working hours.

Not the one to be disheartened, Frederick moved to Hallock, Minnesota, in 1912. He became a farm manager fixing all the tractors and cars in a 50,000-acre farm. This allowed him to dedicate more time to studying electronics. And gobsmackingly, he got an engineering license in Minnesota.

This license gave him leverage when he enlisted during World War I. Head military honchos noticed his abilities and promoted him to Sergeant and got assigned to teach other soldiers.‍

Frederick wasted no time in his return to Hallock after WWI. Some of his lesser-known inventions during this time were:

Those were just the beginning. In 1927, Frederick finally caught the interest of movie theater entrepreneur Joe Numero. Joe hired him to be the electrical engineer tasked to improve film sound quality at his company, Cinema Supplies. And no surprise, Frederick invented a movie ticket dispenser. He had it patented and later sold the idea to RCA. ‍

The stage was set for Frederick to be the King of Cool. The year was 1938. Joe was golfing with another entrepreneur in the trucking business. The man was lamenting losing a whole shipment of chickens who died in transit when the trip took longer than usual.

Joe offhandedly promised his golfing buddy he would build a refrigerated truck. Let it be known that GE and Frigidaire have already come up with the domestic refrigerator between 1923 to 1927.

But a refrigerator in trucks for long-distance travel that wouldn't pop out when a truck hits a speed bump? Unheard of.

Until the 1940s, most long-distance trucks depended on ice for cooling produce. But Joe just had to mention this cooling problem to Frederick. In just a few weeks, Frederick had built the prototype for the refrigerated semi-trailer truck.

It was a no-brainer for Joe and Frederick to start a refrigeration business.‍

The company boomed during World War II when the military used the Thermo King Model C refrigerated trucks. They used it to keep blood, medicine, and food chilled on their way to the battlefields. ‍

Never the one to leave a half-finished job, Frederick also fine-tuned air-conditioning machines for field hospitals where nurses store blood. By 1949, Thermo King was worth $3 million. That's about $34.5 million today.

Frederick received 61 patents during his life, most of which were for refrigeration. Other recognition granted to Frederick were:

Frederick's invention revolutionized the food industry and how we access it. What we eat, how fresh we can eat, and where we get what we eat.

Can you imagine life without ice cream? Or those tropical fruits coming from Asia to Europe? All made possible by Frederick's mobile cooling system.

Thermo King, the company Joe and Frederick started in 1938, now has 359 locations worldwide. Its estimated revenue ranges from $500 million to $1 billion.

More recently- and reminiscent of the Model C delivering much-needed supplies during the war-Thermo King expanded its cold storage solutions to fit the need for COVID vaccines. Trucks set their cold storage at a strictly controlled temperature during transit.‍

Frederick Jones's mobile refrigeration system is a great example of a product made in the right market at the right time.

That was evident in how fast he came up with the prototype. From research, there was no indication that his work failed. Instead, all his other patents were in advancing an already working system.

Jones never let his lack of formal education stop him from getting ahead of his peers and success. His goal is to be successful, never mind his color or lack of education.

And quite frankly, the same things he ignored were the ones that made him stand out among other entrepreneurs.

I'll let Frederick Jones' explain this himself in his speech when he accepted his Merit Award from Phillis Wheatley Auxiliary in 1953: "There are 3 things to do to become successful."