Login
Get a Demo
Subscribe to our Weekly Update!
Resources /
History of Influencer Marketing and What to Takeaway for 2022

History of Influencer Marketing and What to Takeaway for 2022 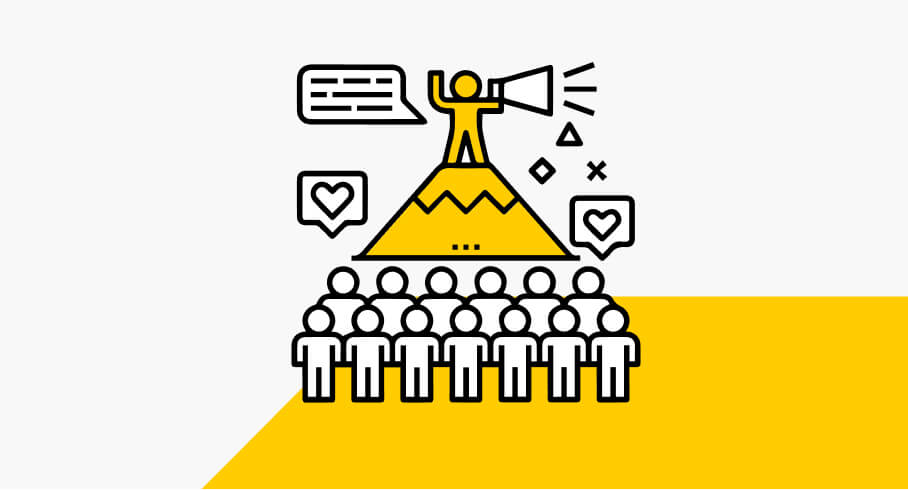 The history of influencer marketing stretches back to the dawn of time. At their foundation, influencers are people who can deliver a message to their target audience. We value messages from friends and acquaintances more, which is the foundation for influencer marketing because influencers engage consumers far more effectively than traditional media, such as television, radio, print, or outdoor advertising.

Is this, however, a brand-recent phenomenon? Who was the first influencer? When did influencer culture start?

Ancient town criers appear to be the oldest link to modern-day influences. These municipal servants were announcing the latest news to the predominantly illiterate townsfolk in medieval England. "Oyez, oyez, oyez!" they would say, to begin and end it with "God save the King!" in England. They'd also put a sign on the local inn's door for anyone who missed the first reading. Town criers were the primary means of transmitting news within towns, which significantly impacted information dissemination.

They also served as night watchmen, announcers at public hangings, auctioneers, and record keepers of critical information for the town. They were so important to communities that harming a crier was deemed treason against the ruler!

Suddenly, companies started hiring them to advertise using their cries. They would holler about the local products and services during their regular duties. For many years, street peddlers used a system of shouts to sell their items. Consider an influencer today who has a town's worth of followers! Town criers were a form of communication for medieval towns and cities, and they relayed the news for an entire community.

The town crier gradually became obsolete as literacy increased throughout the years. However, you can still hear the crier at High Cross if you visit Chester, England.

When he helped establish Wedgwood pottery in the 1760s, King George III (yes, from the musical Hamilton) became a famous booster. Wedgwood promoted the endorsement and boosted his name, and ballooned his sales by providing his royal stamp of approval to Josiah Wedgwood. Wedgwood is still a household name in the ceramics industry today. King George III's royal support helped distinguish him from other potters of the time.

With the rise of literacy in the 1800s, newspapers became the primary means of disseminating information. Newspapers began selling ad space to make more money. Celebrity endorsements grew in popularity as a result of this invention. Famous actresses, writers, and singers began contributing their images to provide legitimacy to product advertisements.

Jenny Lind (yep, the Greatest Showman's singer) was an early adopter of paid celebrity endorsements. The "Swedish Nightingale" was her moniker. When Lind toured the United States with P.T. Barnum in the 1850s, she became the most prominent star of the day, people started selling promotional and souvenir products with her likeness across the country. But this was distinct from what we know today as concert merchandise. Every corporation that could get their hands on her likeness made these goods (whether they paid her or not). Everything from paper dolls to cigar boxes featured her portrait.

Jenny Lind on one side and The Swedish Nightingale on the other of a giant Wheaton Bitters bottle.

4. Pioneer Nancy Green and the face of Aunt Jemima

Marketers used spokespeople who operated similarly to influencers, in addition to paid celebrities. The R.T. Davis Milling Company chose Nancy Green to be the face of Aunt Jemima's pancake mix. She sat for the artist renderings that showed on the packaging. She was also loaned out for promotional occasions to dress up as the pancake mix and suggest it.

These characters sold anything from Frosted Flakes to Gerber meals (Gerber Baby) and set the path for influencer marketing in the future. Marketers and businesses established trust by employing a face that customers could grow familiar with while designing these characters. A century later, brands are still using recognized faces from social media to convey the same sense of trust and authenticity.‍

The next epoch saw a slew of imaginary figures emerge as influencers. Coca-popularization Cola's of Santa Claus in 1932 is the most famous example. Coca-Cola leveraged the merry image of Santa Claus to promote beverage sales during the Great Depression, refocusing their target demographic and helping people recall the company's joyous features during an otherwise awful time.

Following the success of Aunt Jemima and Santa Claus, several companies began creating their characters to serve as brand ambassadors and influencers. You had complete control over your character's image and how it reflected your business when you created your character.

While the firms owned these characters, they offered giant corporations a friendlier face, helping them to appear more trustworthy and approachable to the public.

Advertisements in the 1950s were known for their starlets. According to Victoria Sherrow, Lustre-Cremé shampoo advertising utilized the tagline "loved by 4 out of 5 top Hollywood stars" in print advertisements. Marilyn Monroe, Elizabeth Taylor, Betty Hutton, Jane Russell, June Allyson, and other Hollywood legends were honored. Advertisements appeared in Vogue, Ladies Home Journal, Good Housekeeping, and other women's magazines.

The Marlboro Man, one of the decade's most well-known icons, initially appeared on billboards and in newspapers in the 1950s. Tobacconists used him to make smoking appear more "macho," He was played by a slew of different actors until he died in 1999.

They were demonstrating to clients that they, too, could be as cool and manly as the Marlboro Man himself if they smoked a Marlboro cigarette. Advertisers began to focus on selling "lifestyles" rather than products around this time, and celebrities were the ideal vehicle to do so.

If the internet exploded in the 1990s, the rise of the blog exploded in the 2000s. The concept of modern-day influencers began with mommy bloggers, not with social media platforms. Melinda Roberts launched TheMommyBlog.com in 2002, kicking off the first wave of mommy bloggers. Roberts would document the highs and lows of parenthood on her website. She influenced the way mothers throughout the world parented their children by sharing advice, tactics, items, and toys.

From then, mommy blogs exploded. Women worldwide saw mommy blogs as a way to share their parenting triumphs and failures with the rest of the world. Brands began to notice them as their popularity expanded. People realized that aspirational material might earn them more money since businesses prefer it. Truth-telling does not sell as well as aspirational." Mommy bloggers started striking significant brand agreements.

Instagram, a social media app, was released in 2010. Instagram allowed users to engage with one another by posting photos and sharing things they liked. Influencers took advantage of this platform to connect with their fans more profoundly. Fans rapidly became aware of what social media influencers were using as they exposed their daily lives on social media.

Instagram debuted paid adverts in 2013, making it easier for marketers to interact with diverse influencers throughout the network. Influencers can share what they like and get compensated for it with only a click of a button, making selling things more effortless than ever with help of Influencer Marketing Strategy.

Reality TV series was the first to combine real-life with screen life. A good example is Keeping Up With The Kardashians. Reality television lures most of us with more than life personas. Because these shows depict "reality," we think these actors are more relatable and authentic than traditional celebrities. Reality TV stars paved the stage for what was to come with social media, thanks to increased instant fame and viewer interaction.

TikTok was founded in 2016. What distinguishes TikTok from other sites is that the content you view is completely tailored to you. Users can enjoy a unique and very amusing experience by visiting the "for you page." Not only is it tailored to you, but there is also an extensive range of content to keep you interested at all times.

Influencers have used the platform to expand their reach and interact in new ways. Influencers followed the trends while also putting their fame stamp on them thanks to diverse song and dance trends. Creators are also using the platform to create sponsored content.

9. The new era of influencer marketing

The influencer marketing sector is booming, with an estimated $13.8 billion in revenue in 2021. Since 2010, the world of social media has expanded beyond Instagram. Influencers may now share their life in new and entertaining ways thanks to platforms like Twitter and TikTok.

Users appreciate the platform's easy-to-watch, creative films, and advertisers love how easily their content can reach a large audience. And TikTok's user base is still growing, with around 850 million monthly active users.

A new phrase has been coined to describe this new crop of influencers: "internet famous." If someone is famous online, it means they have entirely relied on the internet and social media to grow their recognition, following, and company.

These are people like Lilly Singh, a Coca-Cola YouTuber, or Kiersten Rich. Kiersten Rich is a travel blogger who works with high-end hotels and resorts worldwide. There is also everyone's favorite feline Grumpy Cat, whose adorably angry appearance landed them (and their owners) brand partnerships with cat foods, clothing lines, and toys.

The future of Influencer Marketing

Consumers and marketers alike have flocked to TikTok in the last year. According to the fifth annual poll, TikTok has become a popular channel for influencer marketing. Only 16% of respondents stated they planned to use the platform for influencer marketing in early 2020. In this year's study, that number increased by 325 percent to 68 percent.

71% of marketers who had already set their budgets for influencer marketing increased their expenditure in 2021, showing that they believe influencer marketing is an excellent strategy and will invest in it. The survey also showed that marketers have improved their campaign activation skills and are getting significant results, demonstrating that they are on the right track.

The survey also found that marketers are becoming more adept at activating programs and achieving spectacular results, showing that influencer marketing will remain a critical avenue for connecting with customers in 2022.

Businesses will give influencers who have genuine messaging and connect with their audience more attention. They're more likely to encourage sales if they support good causes and appear sincere in who they are.

Customers are becoming more interested in the authenticity of the businesses and brands they patronize, and they want to spend in socially conscious places.

Social media fans appear to enjoy accessing behind-the-scenes information from their favorite brands. Wendy's repost of a video of a Baconator being built has gotten over 3 million views. Employee advocacy initiatives will continue to be popular as more firms, including Wendy's, have recognized the potential for influence through their employees.

Your employees are your company's initial point of contact with clients, and they may be a rich source of information. Audiences enjoy hearing from the individuals behind the scenes, particularly in these times of loneliness, when even cheerful banter with cashiers and customer service representatives is scarce.

As the world is fighting to recover from the effects of the covid-19 pandemic, influencers and businesses must be more cautious about the messages they send out. Now is not the time to promote lifestyle excesses or other objectionable content. Instead, influencers are more likely to focus on wellness, helpful hacks, and educational content. Businesses must follow suit by sending out similar messages to their target consumers.