Learn how the native Swede, Ingvar Kamprad, came from nearly nothing, but through innovation and entrepreneurship, was able to create a DIY furniture empire.

Birthplace: Agunnaryd in the Swedish region of Samland 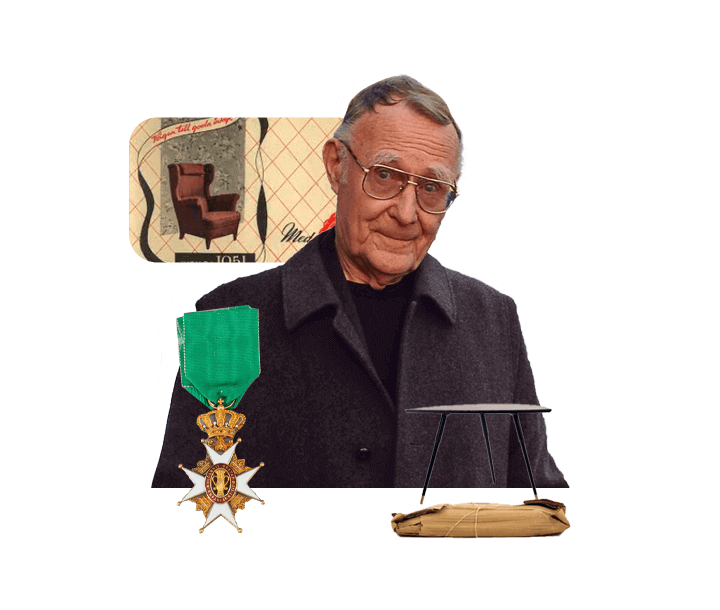 Ingvar Kamprad's vision, like most entrepreneurs', began with a spark — a lot of them. The five-year-old started selling matches, an essential household item, in 1931. So, how did a farm boy from Sweden become the young creator of a multinational corporation?‍

Kamprad was born in 1926 on a tiny farm called Elmtaryd near the village of Agunnaryd in the Swedish region of Samland. From the beginning, Ingvar Kamprad did things differently. In Elmtaryd, his father's family farm, he should've been working hard instead of selling matches for pennies.

It was because of the Great Depression. Poverty was rampant. People stood in line for food, work, and everything else. Including children, no one had the right to waste anything, including time.

It was also true of his family. His mother opened a guest house. In lmhult, a town 20 kilometers from Elmtaryd, her father owned the largest rural shop. Ingvar spent entire days in the shop, playing and performing errands, before going to the farm (when he wanted; his grandfather was more buddy than the boss).

Ingvar was sympathetic to his family's plight and wished to assist them. Instead of doing farm tasks, he focused on helping the family. His family went against the grain and backed their little match-selling entrepreneur, whether or not his minor contributions made a difference. His father's mother was the first customer of the future IKEA entrepreneur.‍

A Keen Eye for Opportunities‍

Ingvar realized he could sell more products because he was good with statistics and a quick learner. Farmers who lacked fishing rights desperately needed fish. Also required were Christmas greetings, magazines, and garden seeds. He rode his mother's bicycle to fields to reach as many customers as possible until he could buy a bike of his own.

When fishing failed to produce a large catch, Ingvar urged his father to purchase nets to increase the yield. He sold the fish he caught, split the proceeds with his father, and stashed the profits in a cigar box.

With matches, he worked out how to aid his consumers while still making a profit for his family by setting inexpensive pricing. He enlisted the help of his aunt in Stockholm, who went out and purchased large, less expensive crates and sent them to him. Invar divided the matches into smaller bundles and marketed them.

But they were not a profitable business, despite the lower cost. So, after a few years, Ingvar stopped selling them and followed advice to preserve the tiny profit to invest later.

He moved to a nearby boarding school when he was 14 years old. He also kept a supply of pencils, watches, wallets, and belts under his bed, ever the entrepreneur. (His classmates desperately needed these!) His father got legal authorization and paid the registration price as a graduation present in 1943 because he was too young to start the firm he intended.

An experiment that resulted in better lifestyles‍

Ingvar continued his business and his college studies. His future took shape as he realized success hinged on the most straightforward, cost-effective distribution from the production to customer.

It meant direct import and mail order for IKEA, primarily for watches and pens. But later, Ingvar realized that the business didn’t have a future. He saved his match money and put it towards something else. That something other was furniture.

ALSO READ - Future Technology - What to Expect by 2050‍‍

IKEA's low prices enraged competitors, and they encouraged Swedish suppliers to boycott the company. Kamprad responded by having IKEA create its products and sourcing materials from foreign companies.

In 1956, Kamprad added flat-boxed furniture to IKEA's inventory to be built at home. It turned out to be the company's turning point. The new items decimated shipping and labor expenses and made it easier for buyers to get their purchases home.

Because of the small size of the packaged goods, Ingvar could stock them in the sales location rather than in a warehouse. Thus the first IKEA store opened in 1958.

IKEA stores followed, initially in Western Europe and then in other parts of the world. ‍

Outside of Sweden, the first stores opened in Norway in 1963 and Denmark in 1969. It was only a matter of time until IKEA swept Europe from there. After a few years, the company established its first store outside Scandinavia.

Over the next decade, IKEA stores popped up worldwide, with crowds lining up for grand openings in nations like Japan, Australia, and Canada. With 53 shops, Germany is IKEA's largest market, followed by the United States with 51. IKEA now has 458 stores in 60 countries.

Kamprad never took out a loan. He kept IKEA a secret. Despite his immense riches, Kamprad continued to travel the world visiting new IKEA stores until he died in 2018 at 91. He flew economy class and drove the same Volvo for over 20 years. He was infamous for being press-shy and never gave an interview.‍

IKEA began selling items on the Internet in 2000, and the firm quickly grew. By 2003, it had amassed such a following that its catalog had the world's most giant yearly print run, and by 2009, it was available in over two dozen languages.

Every IKEA shop has had a café since 1958, which served branded Swedish prepared specialty foods such as meatballs, gravy packages, lingonberry jam, various biscuits and crackers, and salmon and fish roe spread until 2011. Chocolates, meatballs, pickles, pancakes, fish, and other drinks are among the things available under the new name.

In Russia, IKEA owns and manages the MEGA Family Shopping Center network. It also introduced  UK IKEA Family Mobile, a virtual mobile phone network based on T-Mobile, on August 8, 2008. It was the cheapest pay-as-you-go network in the UK when it first launched.

IKEA began its foray into the smart home market in 2016. One of the first ranges to highlight this shift was the IKEA TRDFRI smart lighting kit. It has also expanded its product line to include flat-pack houses and apartments to bring down the cost of a first-time home for a first-time buyer.

Kamprad became one of the richest men in the world in the early twenty-first century because of IKEA's spectacular success. Peter, Jonas, and Mathias Kamprad, Kamprad's three sons, all serve on the board of directors of the Ikea group of companies.

Kamprad brothers hold Ikano Group, a $9.1 billion conglomerate with interests in real estate, finance, insurance, and retail that was initially a subsidiary of Ikea but is now autonomous. However, it still owns eight Ikea locations.

Despite the pandemic, IKEA continues to expand. Job postings have grown by over 200 percent since May. 422 IKEA stores are operating worldwide in 50 countries as of March 2021, with a net worth of more than $1 billion and over 15000 employees.‍

ALSO READ - The Inventor Behind the Iconic Swiss Knife

Kamprad has established a profitable heritage in the worldwide retail corporation specializing in furniture. His accomplishments and legacy have served as an inspiration to aspiring entrepreneurs worldwide. Here are a few business concepts and lessons that entrepreneurs can learn.

Entrepreneurs often start a business with a brilliant idea and invest most of their time and money before recognizing that they may diverge from their consumers' needs. You must build your services and products around your potential customers' problems to grow your business successfully.

You must also provide them with practical answers that they seek. Kamprad committed himself to delivering high-quality, well-functioning items, a major factor in IKEA's international success.

2. To be current, you must constantly reinvent yourself.

3. With entrepreneurship, age is unimportant.

Kamprad, who grew up in poverty, began his career by selling matches for a profit at five. He developed his company by selling Christmas decorations, fish, and pencils at ten while cycling around his neighborhood. He registered the company after receiving a monetary present from his father when he was 17, and it has since grown into the empire it is today.

Kamprad, regardless of age, had the desire to succeed (even if he couldn't drive). It should motivate many entrepreneurs today, whether they are 8 or 80 years old, to never regard their age as a reason they can't or shouldn't achieve something.

So, how about you? - Without question, Kamprad's legacy will live on. It’s an honor to have been a part of his business path and seen the influence he has on our planet. He was crystal clear about what he wanted to accomplish:

"To improve the quality of life for a large number of people." - Ingvar Kamprad.