John B. Stetson: Boss of the American Plains

SUCCESS: His hats are a quintessential fashion statement
Read On! 📖 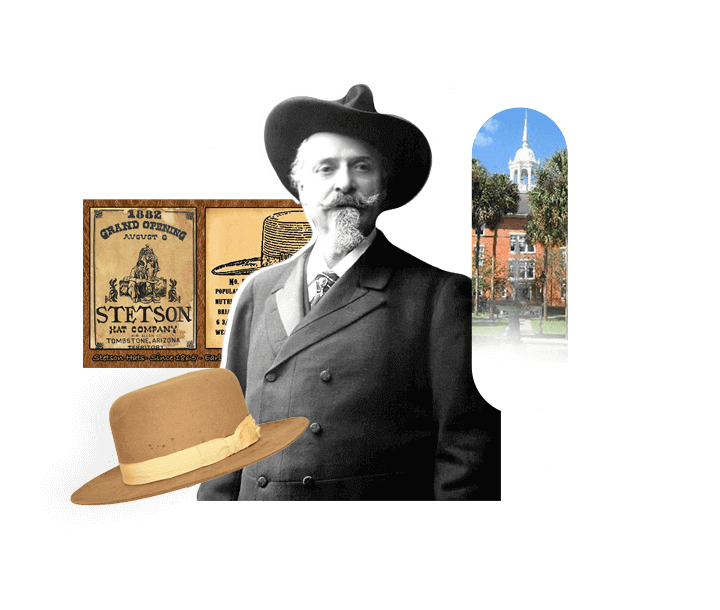 If you are like me, there are a few times you have wondered just how certain things came to be. For me, one of such things was or is the Stetson hat.

I mean, people from all walks of life, irrespective of age, cannot resist this Hat. Whether for fashion or as a cause of necessity. Being a curious man, I decided to dig into the history of the Stetson hat and came across a story of an invention that I just had to share.

John Batterson Stetson was born in Orange, New Jersey, in 1830 to a family of hatmakers. He was the youngest of several brothers, and his eldest of them inherited the family business. How then did the world get to know John above his elders?

John was a resilient young man. Though sickly and expected not to live long due to a problem with his lungs, he was determined to learn the basics of hat making.

Given his bleak future, John did what every young man in the 19th century did: he went west.

Finally settling in Missouri by 1850, he experienced a miracle! The dry wind of St. Joseph began to heal his lungs. However, not so good was that all he had to brag about was his good health.

And I know times have changed, but not so much that having a profession is more about leisure than necessity. John hustled until he found a bricklayer job, but that was short-lived as the company he was working for got swept away by a flood.

Dejected and seemingly down on his luck, he decided to leave Missouri to try out his fortune as a prospector in Colorado.

And Colorado was a strike. So, with only $100 to his name and some failed ventures, John returned home to the East with a big dream. I know-like I told you, his success had a lot to do with resilience. ‍

If one thing sets a great business person apart from his peers, it’s the ability to see a gap in the economy and fill it. This was how it was with John Stetson.

His days as a prospector in Colorado opened his eyes to a market for his hat-making experience. He saw how poorly the Americans migrating to the West were and decided to change.

You should note that at this point in the 1800s, different cities in the east had their preferred hats to guard against the weather. There were top hats, derbies, bowler hats, and even homburg hats.

But, there were no western hats. This myriad of hats, despite their versatility, had no hope against the weather in the West. The settlers’ attempt at a wide brim hat involved using wool which soaked up the moisture from their bodies and could not be repaired once stopped or wet.

This efficiency gap served as the bedrock of John’s invention. From watching and experience, he knew that fur felt hats would serve better than the wool being used.

His first fur wide-brimmed model was immediately successful, which he created as a joke. While he was laughing at his invention, a passing cowboy saw it and bought it off him for a $5 gold piece.

How’s that result for the first day of business?

With the success of his wide-brim Hat in Colorado, it was no surprise that though broken, his return journey to the east was made in high hopes and lofty dreams.

The John B. Stetson Company

In 1865, Stetson founded the John B. Stetson Company. As an aside, wasn’t the world a fantastic place when no one had to think so hard to create a name for their company?

Anyways, John started his company on the East coast. And boy, was it a blast. His most famous model was called the Boss of the Plains. Like the bowler hats of the period, its features could have been what made it a major hit.

Unlike the flashy and extravagant designs that characterized hats, Stetson kept his designs simple. But Stetson was not just an entrepreneur. He also showed marketing acumen.

Once he had made several Boss of the Plains hats, he sent them to every western-wear establishment and made sure to attach a blank order with every sample. ‍

This genius idea of his skyrocketed his fame. Gigantic orders from everywhere pressured this unknown brand on the frontier quickly. The colors of the hats, black and gray-white, also made it quite interesting for the people who would use them.

The white-colored hats, with a slightly wide brim, were preferred by riders in Montana, while the black extensively wide brim hat was a favorite amongst the cowboys in Texas.

It is challenging to run a company without having ethics, and as you can guess, John had some good ones.

First, a period background. Before industrialization, itinerant workers and hat makers were migrant workers in this era. They permanently moved to where jobs were and moved on once the employment dried up. Stetson instituted employee-friendly measures to keep these highly skilled workers under his employ.

Fast forward to twenty years later, Stetson had become a household name and the largest hat brand in the world. His hats became the cowboys' official hats, the Royal Canadian Mounted Police, and the US Calvary.

His company in Philly occupied nine acres of land and was fully mechanized, churning out 2 million hats when he died in 1906. His success continued even after the republic was united.

From this subtitle, you can already guess what happened. When sustenance is threatened, survival takes prominence over all else. As a result of the economic crisis caused by the Great Depression, hat sales plummeted.

The hat-making industry collapsed, and even when it regained some ground after the Second World War, it never reached the glorious heights it crested in 1906.

By the late 1940s, no one needed a hat anymore. People had cars to take them where they wanted to go. The company’s revenue had dropped from about $29m to $8m.

With the widespread increase in automobiles, the once practical yet artistic hat became a necessity of the past. Only those who wanted to be fashionable wore hats. Despaired, his family decided to sell his stocks, and it was through this Ira Guilden came to have a majority interest in Stetson’s company.

And by 1971, the glorious Philadelphia company was shut down. A smaller company opened in St Joseph, Missouri, where John worked when he first left the East.

Ira’s strategic marriage to Louise Bulova saw the merger of both empires. Today, Ira and Lousie’s Stetson company sells hats and other forms of clothing and bourbon.

Despite the downhill slide of the Stetson company, the Stetson hat has been staging a comeback in the last few years...among celebrities globally. Stetsons have become a favorite fashion statement from sportspeople to Hollywood stars, politicians, and even royals.

Today, Stetson University in Florida is named after John. Also, Stetson hats are still manufactured by Hat.co. The company also provides endowments to other universities such as Brown MiT and Tisch in New York.

Hat.co is the only country in America manufacturing fur felt hats from top to bottom. In philanthropy, the Stetson company, through The Bulova Stetson Fund, actively supports the Veteran Watchmaker Initiative, a technical school for veterans who are disabled in the United States. Through the Innocence Project activity, over three hundred and fifty people wrongly convicted have been set free.

The phrase: necessity is the mother of all inventions, is at play in the story of John B. Stetson. But his resilience is what took him from a sickly lad to a paternal business owner with thousands of workers under him.

His shrewd business sense and determination to succeed should teach entrepreneurs today. Stetson took the orange out of all the lemons that life threw at him and made the bestselling citrus juice that outlived him.