Login
Get a Demo
Subscribe to our Weekly Update!
Resources /
Leo Baekeland: The King of Plastics

Leo Baekeland: The King of Plastics 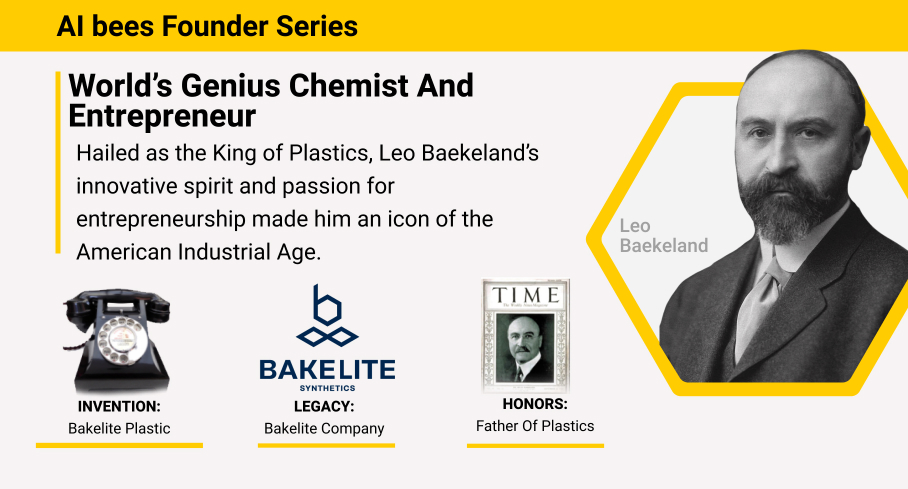 When you have the inclination, the passion, and a clear vision of what you want to become, whatever station in life you are on, there is no challenge you cannot surmount. Meet the man who heralded the second coming of the American Industrial Age

Leo Baekeland was born in Ghent, Belgium, in 1863. His father was a shoemaker, and his mother worked as a maid.  At his mother's urging, Leo studied diligently to attend the University of Ghent.

Young Leo had a voracious appetite for learning. He studied chemistry and physics. He was a young academic star, at the age of 24, teaching at the university in Bruges.

His love for America that would last his lifetime was sparked when he read Benjamin Franklin's Autobiography as a young boy.

In 1887,  during his tenure as a Professor of Physics and Chemistry at the Government Higher Normal School in Bruges, Baekeland invented Velox. This procedure uses water instead of chemicals when developing photographic plates.

The invention was patented in Belgium.

It was a period when the U.S. was reeling from the recession. Baekeland was unable to find an investor or buyer to produce his product commercially. That didn't stop him. He co-founded with Lenard Jacobi as his partner, the Nepera Chemical Company. The company became a successful commercial venture!

In 1889, Leo Baekeland, along with his partners, decided to sell the company. He made a fortune when George Eastman bought it for $750,000. He bought a house in Yonkers and set up a well-equipped laboratory within the premises.

Due to a clause in the sale with the Eastman Kodak Co. That restricts Baekeland from performing any research in photography for the next 20 years, he diversified to other fields.

The Age of Plastics

According to Baekeland himself, he entered the field of synthetic resins to make money.

Baekeland's foremost objective was to find a replacement for shellac. During this time, chemists acknowledged that many natural resins and fibers useful for coatings are polymers.  Baekeland studied the reactions of phenol and formaldehyde, and he produced soluble phenol-formaldehyde shellac he called Novolak. It was not a market success.

He then turned his energies to developing a phenol-formaldehyde binder for asbestos, which at that time was molded with hard natural rubber. Finally, he successfully produced a polymer that, when mixed with fillers, produced a hard moldable plastic.

Thus the first synthetic polymer was born, and the age of plastic began.

Bakelite was unique because of its resistance to extreme heat, and it would not melt. It was the first plastic commercially produced that is entirely synthetic, can be molded, resistant to heat, solvent, and electricity.

Bakelite's application as an electrical insulator was immediate and soon increased to other diverse and multiple uses.

It became known as the material of a thousand uses.

Baekeland's invention ushered in an industrial, as well as a cultural, revolution. Bakelite plastic revolutionized the 20th century and transformed people's lives worldwide.

Bakelite was the right product for the times as the automotive, aviation, and electronic industries were all on the rise and all needed material like Bakelite.

-Grand prize of the Panama-Pacific Exposition, 1915

-Perkin Medal of the Society of Chemical Industries, 1916

As a son of the soil, the Belgian Government was proud to bestow upon Leo Baekeland the prestigious 'Officer of the Order of the Crown' and 'Commander of the Order of Leopold. ' He was also an esteemed member of the U.S. Dept. Of Commerce Chemical Advisory CommitteeToday, Baekeland's legacy continues to live. As the material of choice for a thousand uses, the influence of Baekeland's Bakelite continues to be part of our everyday lives and will continue for years (centuries?) to come..

He was also an esteemed member of the U.S. Dept. Of Commerce Chemical Advisory Committee.

He was also an esteemed member of the U.S. Dept. Of Commerce Chemical Advisory Committee.

Father of Plastic: A Driver of Industrial Development

Today, Baekeland's legacy continues to live. As the material of choice for a thousand uses, the influence of Baekeland's Bakelite continues to be part of our everyday lives and will continue for years (centuries?) to come.

Bakelite was instrumental in filling a gap of a specific demand to boost industrial development. It was the crucial element in expanding and transforming various other industries, which were at the heart of the second industrial revolution.

Leo Baekeland and Beyond According to science writer Susan Freinkel in Plastic: A Toxic Love Story, "Bakelite was an important step in developing the plastics industry and the entrance of plastics into people's everyday lives."

In 1940, Time Magazine named Leo Baekeland the "Father of Plastic" because Bakelite proved more versatile, cheaper to produce than any other substances, and had diverse uses. It appears to have been used in almost everything from pots to electronics

Throughout his lifetime, Baekeland obtained about 400 patents relating to his innovations.

Did you know that the heat shield on the 1991 Jupiter probe was a phenolic resin based on phenol and formaldehyde? One of Baekeland's inventions!

Leo Baekeland founded General Bakelite in 1910. By 1922, He formed the Bakelite Corporation (a merger of three companies), and by 1939 the company was acquired by Union Carbide and Carbon Corporation.

Today, Baekeland’s innovation lives on in his patent and trademarks, which are now under The Dow Chemical Company. The company continues to manufacture Bakelite products used in fire-resistant buildings, transportation systems, from electronics to space travel, and several industrial applications.

Bakelite made lives easier, more enjoyable, and colorful. Just think of pots, guitars, pieces of games and toys, pieces of jewelry, and even the whole body of cars! And thousands (or millions?) more.

But his most incredible legacy is the use of Bakelite in technological components.

The contributions of Leo Hendrik Baekeland in the world of business are immense!

As an inventor, he was not easily discouraged as he attempted to harness the reaction of phenol and formaldehyde into a manageable, commercial product.

And what a marketer he was! His invention challenged the perception that synthetic plastics were inferior to natural materials such as amber or wood. His success in this area facilitated the marketing of other plastic products as well.

As an entrepreneur, he knows what the market needs. He not only created a tool to fill the void in the market, but he also built a business enterprise.

What is remarkable about Baekeland is not only his innovative genius, he was also a cunning and keen businessman.

Clear focus and goals from early childhood made Baekman excel in innovation. His quest for continuous improvement, refining, and improving inspires young researchers to emulate his accomplishments in fundamental applied research.