Login
Get a Demo
Subscribe to our Weekly Update!
Resources /
Levi Strauss: A Life of Originality, Business Integrity, and Philanthropy

Levi Strauss: A Life of Originality, Business Integrity, and Philanthropy 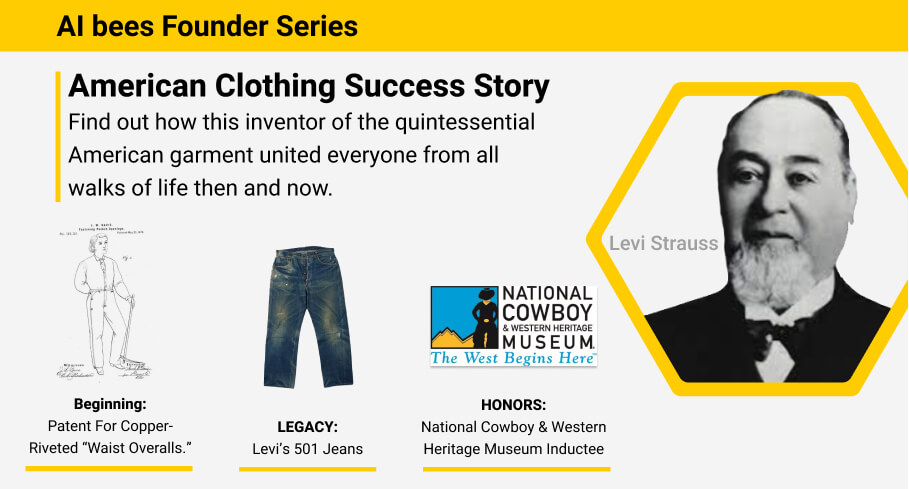 We try to follow the dictates of an era, but who among us has never owned a pair of jeans? Or a better question yet, who doesn't have a pair of jeans that we keep coming back to like a comfort blanket?

All thanks to a gentleman whose entrepreneurship is an early American clothing success story.

He started an enduring fashion empire, which he launched by making one of the most beloved and popular clothing of all times — the blue jeans.

Rediscover the success story of one of the most admired businessmen and beloved philanthropists of all time, Levi Strauss.

A Family of Entrepreneurs

The inventor of the quintessential American garment, the blue jeans, Levi Strauss, was born on February 26, 1829, in  Buttenheim, Bavaria, to Hirsch Strauss and his second wife, Rebecca.

Because of the difficult situation the Jews were in during that time, Hirsch wanted to bring his family to America. However, he was sick with severe lung disease and died in 1822.

Soon after that, his two elder sons Jonas and Louis journeyed to America to start a dry goods business in New York, where many American Jews settled.

Two years after, Levi (named "Loeb" at birth), together with his mother and two sisters, joined Jonas and Louis in New York when he was 18. Then moved to Kentucky when he was 19 to peddle his brothers' goods. He prefers frontier areas to sell his goods.

After the California Gold Rush in 1848, many people flocked there to make their fortunes, mining and selling goods to the miners. The 24-year-old Strauss, having recently become an American citizen, joined his sister Fanny Stern and her family in California in February of 1853. He served as the West Coast representative of the family’s New York firm.

Levi endured a long rough voyage with as many goods and wares he could bring.

By early March of 1853, Levi established a wholesale goods business under his name, Levi Strauss & Co. His new company imported dry goods in bulk; clothing, bolts of fabric, underwear, umbrellas, and many more, then sold them to the small stores that sprung up all over California and the West.

These retailer stores helped outfit the miners, and eventually, the new settlements that the Gold Rush brought in.

Active in business and cultural life, Levi was already a well-known figure in San Francisco when he was in his mid-thirties.

In business, Strauss had a reputation of being honest, fair, and unpretentious.

At 40, Strauss was already a millionaire and earned a considerable reputation as a noteworthy businessman and a philanthropist in San Francisco. Even with his prestige and status, Strauss insisted that his employees call him Levi and not Mr. Strauss.

According to the stories, when Levi's ship docked in San Francisco from New York, men boarded the vessel and quickly bought almost everything Levi brought with him except for a type of strong cloth used for making tents.

A miner heard that what's left is the cloth for 'tenting,' and he told Levi he should have bought many pants to sell because pants don't last long at the 'diggings.'

This gave Levi an idea. He brought the cloth to a tailor who sawed a pair of pants for that miner. The minor bragged about how strong the pants of Levi's were. And this is how Levi began making pants bearing his name.

The pants were an instant hit with the miners, but they tend to chafe.

Later on, the fabric became known as denim, and the pants were nicknamed blue jeans.

In August of 1872, Jacob Davis, a Nevada tailor who is one of Levi's regular customers, wrote to Levi about the interesting way he made pants more durable for his miner and labor customers. He placed metal rivets at the strain point (at the base of a button fly and pocket corners.)

Davis wanted to patent the idea but needed a business partner for financial backings. He asked Levi for the two of them to take out the patent together, sharing the costs. Levi loved the idea.

Davis and Levi were granted the United States patent #139121 for using copper rivets to strengthen the pockets of work pants on May 20, 1873. Just nine months after Davis wrote to Levis. Davis then came to work for Strauss in California, overseeing the firm's first West Coast manufacturing facility.

Design of the first jeans

In 1886,  the Two Horse Trademark of Levi's was introduced and lasted to this day.

Two Horses: The two horses trying to rip the jeans apart convey the message of the pants' toughness and durability. Strauss believed that it was an excellent way to stress the quality of the pants to customers who can't speak English.

501: 1890 is also the year the patent expired on riveted pants. The company listed those batches of pants in its catalog as number 501. The name stuck. Now 501 means the best batch of pants.

XX: Amoskeag Mill in Manchester, New Hampshire, used XX to designate the highest quality of their denim. Strauss got his denim from this mill to create his first pair of blue jeans after he obtained his patent.

Patented May 20, 1873: The date is etched in history as when Strauss and Davis received their patent for the riveted blue jeans.

When David Stern, Levi's brother-in-law, died in 1874, his four sons all went to work for Levi. In 1890, Strauss incorporated Levi Strauss and Co. and kept 55 percent of the share. The rest he divided among the seven Stern children.

Although his nephews were running the business by 1890, Strauss continued to go to his office daily, attend meetings, and remain the company's head.

Levi Strauss died peacefully in his sleep on September 26, 1902.

Levi carried on many business pursuits during his career, as well.

-A director of London, Liverpool and Globe Insurance, and Nevada Bank.

-In 1875, Levi purchased the Mission Pacific Woolen Mills, and the mill's fabric was used to make the "blanket-lined" pants and coats of the Levi Strauss and Co.

-In 1895 he and several other prominent San Francisco businessmen provided funds to build a railroad from San Francisco to San Joaquin Valley.

Levi was a heavy contributor to the Pacific Hebrew Orphan Asylum and Home, the Eureka Benevolent Society, and the Hebrew Board of Relief.

In 1897, Levi provided funds for twenty-eight scholarships at the University of California, Berkeley.

In 1994, Levi Strauss was inducted into the Hall of Great Westerners of the National Cowboy & Western Heritage Museum.

The Levi Strauss Museum was built in his honor. It is located in the 1687 house where Strauss was born in Buttenheim, Germany.

Levi’s jeans have had a lot of competitors over the years. But Levi’s brand never goes out of style. Innovation and creativity are embedded in every clothing and pair of pants. Ripped or new pair of jeans,  people wear it in comfort and style, and most of all with pride.

I don’t need to say more but this: with Levi's®, Signature by Levi Strauss & Co.™, Denizen®, and Dockers® brands,  Levi Strauss and Co.’s apparel are sold in 110 countries.

Levi Strauss’s life is a story of commitment, innovation, creativity, and devotion to quality.

He was the Marco Polo of the 19th century, traveling from Europe to America to ply goods. He was committed to his profession, and he never let hardship stands in the way. He was willing to get down and dirty and work hard. As a result, he achieved respect, prestige, and success.

Today’s business arena has many challenges, but if we take our lessons from Levi Strauss, we should stay committed to our goals no matter what.

Competitions abound, but if we stay innovative, creative, and devoted to quality, one can have more than a fair chance of succeeding as an entrepreneur.