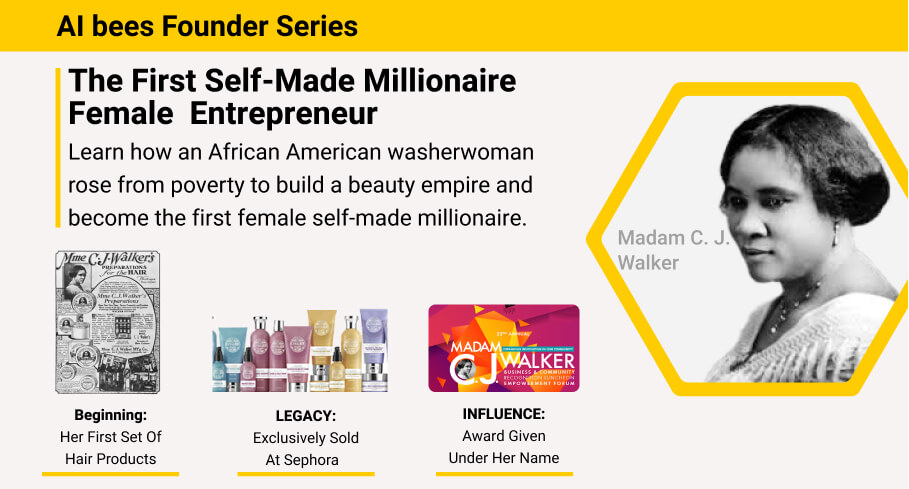 Hair is a woman's crowning glory. And for most, using hair care products is necessary to keep their hair looking preened, polished, and beautiful at all times.

Beautiful hair instantly boosts one's self-esteem. When you have gorgeous hair, you feel on top of the world, but have you ever considered how much bad hair can ruin your day? One day, Sarah found herself in this situation.

Her hair began to fall out!

It was itchy, crunchy, and patchy, and it was not going away. But rather than giving up, Sarah continued her quest for the proper products. Then she invented something superior to any shampoo or hair oil she had ever used. Her hair continued to grow! That's when she decided to change her name to "Madam C. J. Walker" and start her own company.

Born on December 23, 1867, Sarah Breedlove Walker grew up on a cotton plantation near Louisiana.

In 1885, she had a daughter, A'Lelia, with Moses McWilliams, whom she married at fourteen. She became a widow at the age of twenty years.

Walker and his 2-year-old daughter A'Lelia relocated to St. Louis, where Walker worked as a laundress while attending night school. She performed in the St. Paul African Methodist Episcopal Church choir and was a National Association of Colored Women member. In St. Louis, she met Charles J. Walker, the man who would become her second husband—and the name of her eventual empire—for the first time.

By Chance, She Discovered Hair Care

Walker didn't start thinking about hair care products until she started losing her hair. Her scalp became infected, and she became nearly bald. She sought treatment but immediately recognized that pills would not help. With nowhere else to turn, she tried a variety of home cures and store-bought hair care products, hoping to improve her situation. She quickly understood that preparing the components yourself was the best option.

When it came to her finding, Walker knew she had hit gold. She started a brand and differentiated her goods from those made by cosmetic companies by marketing only to the Black community and promising that her products would treat Black hair. She used a personalized door-to-door strategy to sell her handcrafted products directly to black women.

Starting her own business

She relocated to Denver, Colorado, and began working for and selling things for Annie Malone, who solicited her assistance after noting her ability to sell. She began designing her line and establishing her headquarters while working for Malone.

In her first line of goods, she combined petroleum jelly and sulfur, prompting a breach between her and Malone after Malone accused her of stealing her ingredients, even though they had been used for centuries. Following her split from Malone, she began traveling and teaching about her products and hair care, gaining a large following.

Charles J. Walker, a journalist, assisted her in expanding her firm when they married. Thanks to his connections, she gained exposure through the black press, which carefully covered her talks and products. She relocated her company to Indianapolis and created approximately twenty hair and skincare products.

“I got my start by giving myself a start.” Madam C.J. Walker

In Pittsburgh, PA, Walker created a factory to make and package her products and a beauty school. Madam C.J. Walker Manufacturing Company had grown to be enormous, producing items and training agents. Long before Mary Kay Cosmetics existed, the "Walker Agents" became well-known in black communities across the United States.

Madame C.J. Walker became well known all around the world.

Walker traveled across Latin America and the Caribbean after she and Charles separated, promoting her products and recruiting others to teach the company. At the same time, her daughter A'Lelia assisted in purchasing real estate in Harlem, New York, where the Harlem Renaissance was just getting started.

Walker moved into her new house in Harlem when her travels were finished, where she continued to run her business. Appointment managers ran the factory in Indianapolis.

Walker became a part of the Harlem Renaissance's overall culture, which included charity. She established college and university scholarships, collected money for the elderly, and backed the NAACP and the National Conference on Lynching. She also made the most significant contribution by an African American to the development of an Indianapolis YMCA.

Walker constructed Villa Lewaro, an Italian-style home. Vertner Tandy, a well-known African American architect, designed it. Many of the greats of the Harlem Renaissance era congregated at the house. In 1976, it was listed as a National Historic Landmark.

Her firm remained after her death in 1919. The Walker Building, an arts center under construction at the time of her death, opened in Indianapolis in 1927. It has now been designated as a National Historic Landmark. Walker was featured on a stamp issued by the United States Postal Service in 1998 as part of its "Black Heritage" series. On May 12, 2018, she was posthumously given the IUPUI Chancellor's Medallion at the IUPUI Commencement Ceremony.

As of March 2020, Sundial Brands announced the revival of Madam C. J. Walker Beauty Culture sold at Sephora. In addition to its 2,700 stores in 35 countries worldwide, it operates over 500 stores across the Americas. Sephora employs over 1,600 people across five delivery locations in four states: Maryland, Mississippi, Nevada, and Utah.

Madam C. J. Walker contributed to defining the role of the self-made American entrepreneur in the twentieth century, establishing herself as a pioneer in the modern black hair-care and cosmetics industry, and setting standards for corporate and community giving in the African-American community.

For budding entrepreneurs who wanted to know how she went from poverty to riches, she recommended tenacity and patience, faith in herself, great products, and "honest business dealings." She once said, "There is no royal flower-strewn route to achievement." "And if there is, I have yet to discover it because all I have accomplished in life has been due to my willingness to work hard."