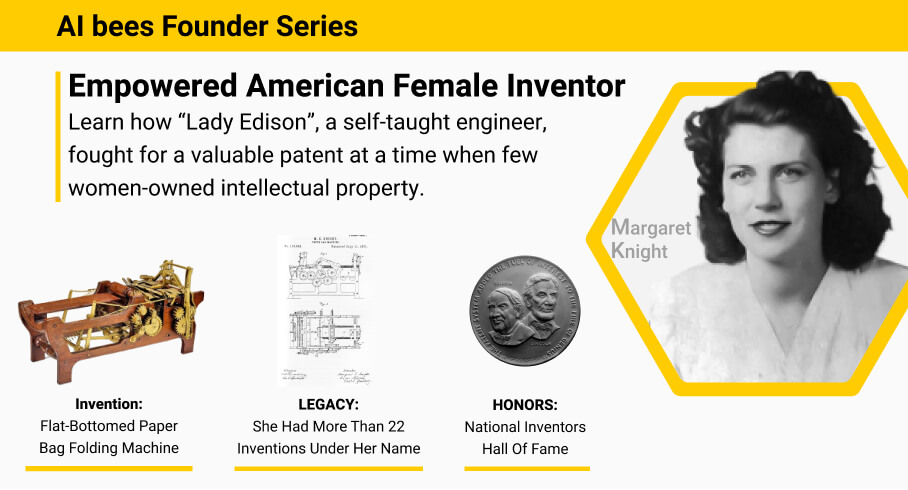 Anyone who has ever carried groceries from the grocery store or packed a lunch for work or school may be familiar with Margaret Knight's invention, the flat-bottomed paper bag. This was the most well-known of Knight's inventions, which she patented in 1871.

So Francis Wolle actually invented the paper bag, not Margaret E. Knight. However, it was Knight that invented the modern paper bag. Knight was raised by a single mother in Maine, where he was born in 1838. She was born with the capacity to recognize a problem and devise a solution.

Her first job was at a textile mill when she was twelve. A steel-tipped flying shuttle burst out from its spool of thread and wounded a little boy, which was a regular cause of harm at cotton mills at the time.

She quickly created an unusual loom-shuttle restraint system that would prevent similar mishaps, using her skills of producing wooden and metal toys.

The cotton mills quickly adopted it like a wildfire across the nation because it was so effective.

Wrap it up! : Paper Bags Could be Better

Paper bags used to have a narrow bottom since they were more like envelopes. The bags had to be folded by hand in order to have the flat bottom that we see today. It was a time-consuming process that was not profitable. Margaret Knight moved to Springfield, Massachusetts, from New Hampshire to work for the Columbia Paper Bag Company. Knight couldn't believe how long it took to construct just one flat-bottomed bag. She began to consider a machine that could complete the task. She drew a model and then set about figuring out how to construct a machine model.

Margaret E. Knight had a functional wooden model that could cut, fold, and glue the bags together only by turning a crank within six months of her first idea. It wasn't the most durable machine, but it managed to produce almost 1,000 bags! Knight collaborated with a machinist to make an iron prototype now that she knew it would function. She relocated to Boston in order to perfect the innovation. It took her a few months to be ready to file a patent application.

A Thief and the Ensuing Court Battle

While Margaret was in Boston working with the two machinists, another machinist called Charles Annan in the shop seemed to be particularly interested in her machine. Knight was unconcerned about it until her patent application was denied. She was astonished to learn that a comparable contraption had already been granted a patent.

Charles Annan had stolen her idea and was the first to file a patent application!

She pursued Annan and filed a lawsuit against him. By giving witnesses and years of sketches and plans for the machine, she was able to prove it was her concept. Annan tried to persuade Knight that his machine was superior to Knight's.

According to legend, he protested that a woman could not invent such a complicated machine.

"I've been involved with equipment in some capacity since I can remember... I have worked at almost everything where machinery is employed,” Knight said during the court battle.

In 1871, the Patents Office granted Knight the rights. The same year, Queen Victoria bestowed the Royal Legion of Honour upon her, as flat-bottomed paper bags became increasingly popular around the world.

The Smithsonian's National Museum of American History houses a scaled-down but fully functional patent model of Knight's pioneering machine (actually an upgrade on her initial invention, patented in its own right in 1879).

Margaret E. Knight's inventions did not end with the paper bag! She invented so many things that she was dubbed "Lady Edison" by the press. Knight also had patents for a sewing machine reel, a paper feeding machine, a numbering system, and a sleeve-valve engine, in addition to her paper bag machine.

She was granted at least 27 and maybe 30 patents in total, despite the fact that she invented many technologies that were not patented.

‘‘I’m only sorry I couldn’t have had as good a chance as a boy’’.— Margaret Knight.

Despite the fact that Knight's struggles as a female inventor have become mythologized beyond reality, she encountered numerous obstacles and limitations. Women had a tiny percentage of patents at the time Knight patented her paper bag machine. Women account for less than 10% of primary inventors today.

Knight was referred to as "woman Edison" in an obituary.

She was highlighted in a 1913 New York Times story titled "Women Who Are Inventors," which debunked the notion that women are intellectually inferior. The 1913 article was written in response to a physician of the time who sparked debate with his assertion that women had a place in literature but were not inventive, citing the few women who have been recorded as eminent artists, composers, inventors, or even professions traditionally associated with women, such as chefs and fashion designers.

The Curry Cottage at 287 Hollis St in Framingham has a plaque honoring her as the "first woman issued a U.S. patent" and the holder of 87 U.S. patents.

Knight's most successful invention was flat-bottomed paper bags. They were used to replace cloth sacks, crates, and boxes for shopping for nearly a century before being supplanted by disposable plastic bags, which were developed in the 1970s and 1980s using a low-cost manufacturing process.

In 2006, Knight was named to the National Inventors Hall of Fame. The Smithsonian Museum in Washington, D.C. has a scaled-down but fully functional patent model of her original bag-making machine.

Knight's brave example undoubtedly inspired many female inventors in the early 1900s—and today. Her talent, tenacity, and perseverance are an inspiration to anyone with original ideas who wants to make the world a better place. Someone tried to copy her design, so she sued him and won, as well as profiting from her invention. She was a tough lady.

Humble paper bags, which are still made using upgraded versions of Knight's "industrial origami" machine serve as a reminder of how much one determined woman might achieve, even when the odds were stacked against her. She's a fantastic heroine!