Resources /
The Best Strategy When Dealing With Unresponsive Leads

The Best Strategy When Dealing With Unresponsive Leads 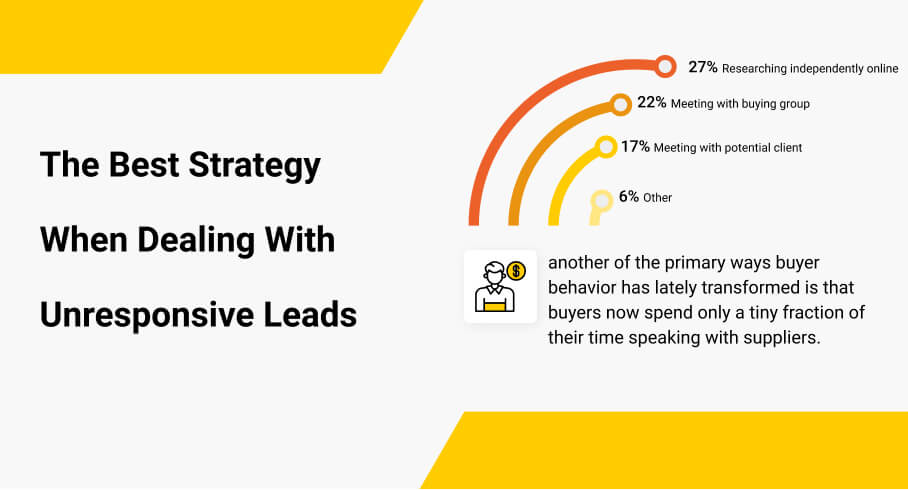 You're having a busy sales day when you receive a request notification. Naturally, you phone the client's number as soon as possible. Although they appear to have just completed filling out the form, they do not pick up. You become frustrated and wonder if following up with them is worthwhile.

Is it a worthy effort if they don't want to respond?

I've been there before. I once created a lead-generating page and drove traffic using paid traffic sources I am familiar with. Many people viewed my sales video and took the time to fill out a form with all the essential information (phone, email, name, and website), but when I

contacted them to ask them questions or offer them advice, they did not respond (most of them)

So I did what any salesperson would do: I sent a follow—up email. Nothing! I sent another message.

Nothing. I called them.

They apologized and stated that they would evaluate my communications as soon as possible. But nothing changed. I emailed once more.

It was pretty aggravating since I assumed I had lost somewhere my emails in the middle, which was not the case.

I had to devise a few communication tactics that had a high possibility of yielding a response to find out. As a result, it helped keep my colleagues and me from wasting time.

Before we go into what worked for me, let's look at some of the likely reasons you aren't getting a response.

Why aren't potential buyers picking up your phone?

1. Consumer behavior is changing. More of your prospective customers are turning online to buy. They want to buy quickly and with as few steps as possible.

According to a recent LinkedIn study report, the following B2B purchasing pattern has emerged.

2. According to Gartner, another of the primary ways buyer behavior has lately transformed is that buyers now spend only a tiny fraction of their time speaking with suppliers.

3. Buyers' intentions shift quickly! waiting too long to contact them, gives them time to do research and maybe choose another vendor.

When Buyers Go Cold, Here Are 5 Approaches to Consider

You're out after three flurries. Buyers expect sellers will pursue them until the end of time. Sellers who do this struggle because they spend too much time chasing ghosts.

If a buyer becomes unresponsive, try three rounds of outreach before going on. Rounds begin when you are concerned that the buyer has gone cold.

You should leave a voicemail and email in each round. Many sellers cannot buy close deals because their email is misplaced in their spam folder and only discovered months later.

You should strive to resonate analytically and emotionally in the first two rounds. You will not receive a reaction if your communications do not elicit emotions such as hope, desire, or fear.

In the last round, inform them you will no longer be contacting them. Buyers, once again, expect you to pursue them. When they realize you're leaving, the dynamic shifts. This last message frequently evokes a response.

Almost everything can lead the buyer to lose interest and shift their attention away from you.

It's also not only about sending. It's also a matter of asking. You may say something like:

An excellent sales narrative describes the buying process, the buyer's needs, the impact, and so on. However, it is possible to ask the buyer directly about what's on their mind if they seem unusually silent.

If you know somebody at the company who might fill you in and offer help, ask them.

If your first two rounds fail, finish by reversing direction. Reversing the course has an unexpected effect: it shows the end of your quest. Most buyers expect vendors will pursue them indefinitely.

When you say you're done chasing, you usually get a reaction. Loss aversion is a powerful motivation. If the buyer is interested in what you offer, sending the reverse direction email, voicemail, LinkedIn message, etc., will arouse their fear of loss.

Should You Give Up on a Lead?

Certain leads will remain unresponsive despite your best efforts. While you can reactivate many of those leads, there comes the point when there are better leads on whom to focus your time and resources.

There will come a time when you must whittle down your list of potentials and begin hunting for leads who are your target market.

If you haven't been able to re-engage with potential, if they haven't visited your website, answered your texts, or seen your emails despite multiple tries, it may be time to let them go.