Login
Get a Demo
Subscribe to our Weekly Update!
Resources /
Karl Elsener: The Inventor Behind the Iconic Swiss Knife

Karl Elsener: The Inventor Behind the Iconic Swiss Knife 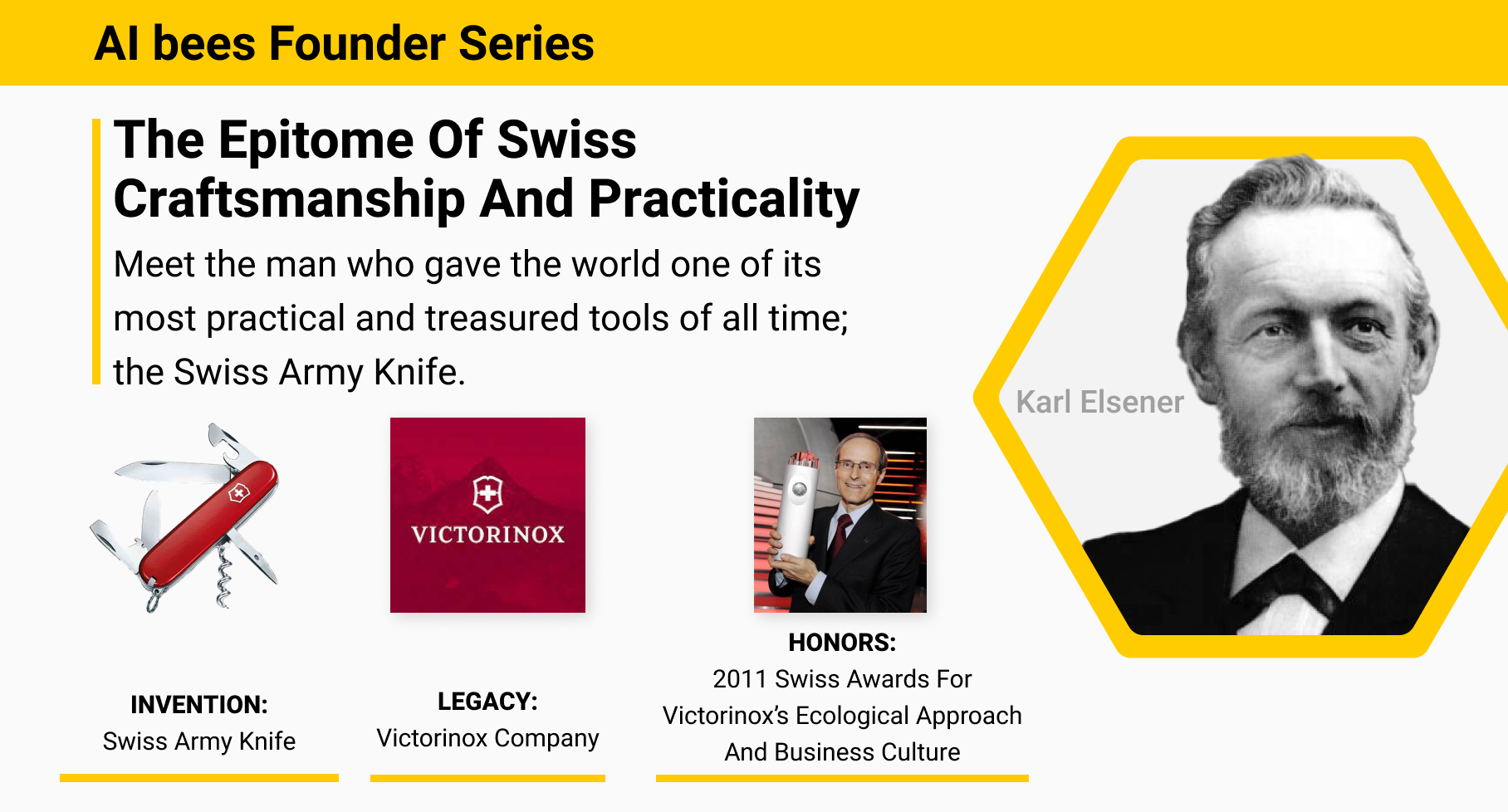 Anyone who watched the beloved TV series McGyver knows he is never without the swiss knife.

Ask any man if he is allowed one material possession he can bring with him anywhere; I would bet the swiss army knife will, hands down, be on top of the list.

To own a swiss army knife is a dream of any man, and woman for that matter. In fact, the swiss knife is among the favorite items for gifts and the favored things for practical use and survival.

People appreciate the value of this invention, and so many fascinating and endearing stories are attached to the Swiss Army Knife. Very few people have an enormous impact and legacy that's forever etched in the lives of people all over the world, especially enthusiasts and collectors.

Through his knife invention, Karl Elsener did just that. Let us relive the life of this gentleman whose business acuity is equaled by his strength of character and passion for excellent craftsmanship.

Karl Elsener was born on October 9, 1860, in Switzerland. He was raised by his doting and devoted mother, Victoria Elsener, who was his rock, moral and financial supporter.

Karl was fascinated by cutleries, and thus he apprenticed as a knife maker in Zug. He spent his years as a journeyman and finally settled in Ibach, Switzerland, to open a workshop for knives and a factory for surgical instruments.

In 1891, Karl Elsener I learned that the Swiss army had decided to distribute knives to its soldiers. At that time, no Swiss company had the production capacity to supply the knives, so the initial order for 15,000 knives was filled by the German knife manufacturer Wester & Co. from Solingen, Germany.

Karl Elsener then established the Association of Swiss Cutlers, which consisted of many small workshops. As a result, he bagged his  First Contract With the Swiss Army and delivered his first major supply of knives that could open canned food and assemble, disassemble, and maintain their rifles.‍

Elsener's Swiss Army Knife is among the few things associated with Switzerland together with its banking industry, alps, and watches. It appears that no traveler can bear to leave the country without buying one.

In 1897, Karl Elsener went on to improve on his folding multi-use knife and came up with the Swiss Officer's and Sports Knife – now the iconic Swiss Army Knife.

This builds the foundation for a flourishing business enterprise that not only holds its own on the world stage but dominates and comes out the best. From that time on, Karl's spirit of solidarity, love for his roots in his region, and a strong commitment to quality and innovation shaped what's to become the Victronix company.‍

Victorinox, the maker of Swiss Army Knife since 1897, upholds the company's commitment to Swiss precision and a strong focus on creativity and quality now operates in 120 countries worldwide.

In loving memory of his mother, Elsener named his company Victoria and registered the brand name and emblem with cross and shield as the trademark.‍

The arrival of steel in the industrial scene was a very significant event in the cutlery industry. Thus Karl combined the name of his mother Victoria and inox (stainless steel) to rename his company into Victorinox.‍

During world war II, Kelsener's knife got its American name. It's been said that the American G.I.s who are so fond of knives couldn't pronounce the German word "offiziersmesser," so they started calling it by its literal English translation, the Swiss Army Knife.

The Swiss Army Knife's entrance to America was quick. American soldiers going home bought them for gifts and personal use, spreading its popularity to the American continent and prompting mass orders to be shipped to the USA.‍

The hit television series MacGyver would see the series hero using the knife to get away from dangerous situations and designing solutions to apparently unsolvable problems with the aid of the Swiss Army Knife. The Swiss army knife's popularity soared, and the business empire became more extensive.

Karl Elsener's knife has become synonymous with inventiveness, versatility, quality, and durability. It's been a favorite for people of action and the outdoorsy types since its inception. There will never be any other knife with more cultural and global significance than Karl's Swiss Army Knife.

Victorinox's watches are a display of impressive aesthetics, accuracy, and mechanical excellence. It is designed and built to get the attention of even the pickiest watch aficionados. This is the reason why Victorinix's watch line achieve tremendous success.

With the same exacting quality as that of the Swiss Army Knife and excellent designs, Victorinox's line of cutleries earned its reputation in kitchens all over the world.‍

Victorinox's fragrances proudly relate to the story of Switzerland. The scents embody both the energy of Switzerland's unique metropolis and the alps and crystal clear waters. Both arresting and nostalgic.

The most fascinating Swiss Army Knife ever made is the Wenger 16999, which features a whopping 87 fixtures with 141 functions!

The life of Karl Elsener is the epitome of creativity, innovation, and dedication to quality. These commendable characters can really propel a business forward to unimaginable heights even beyond one’s lifetime.

This is among the most significant lesson we can learn from the extraordinary business acumen and character of Karl Elsener. Competition in the business world today is aggressive and fierce; devotion to continuous improvement and unrelenting product and service excellence can make a world of difference.

So to speak, we must not rest on our conceived laurels but must continue to be truthful to what makes our business thrive.