Resources /
The Lady Who Stops Bullets: The Genius of Stephanie Kwolek

The Lady Who Stops Bullets: The Genius of Stephanie Kwolek 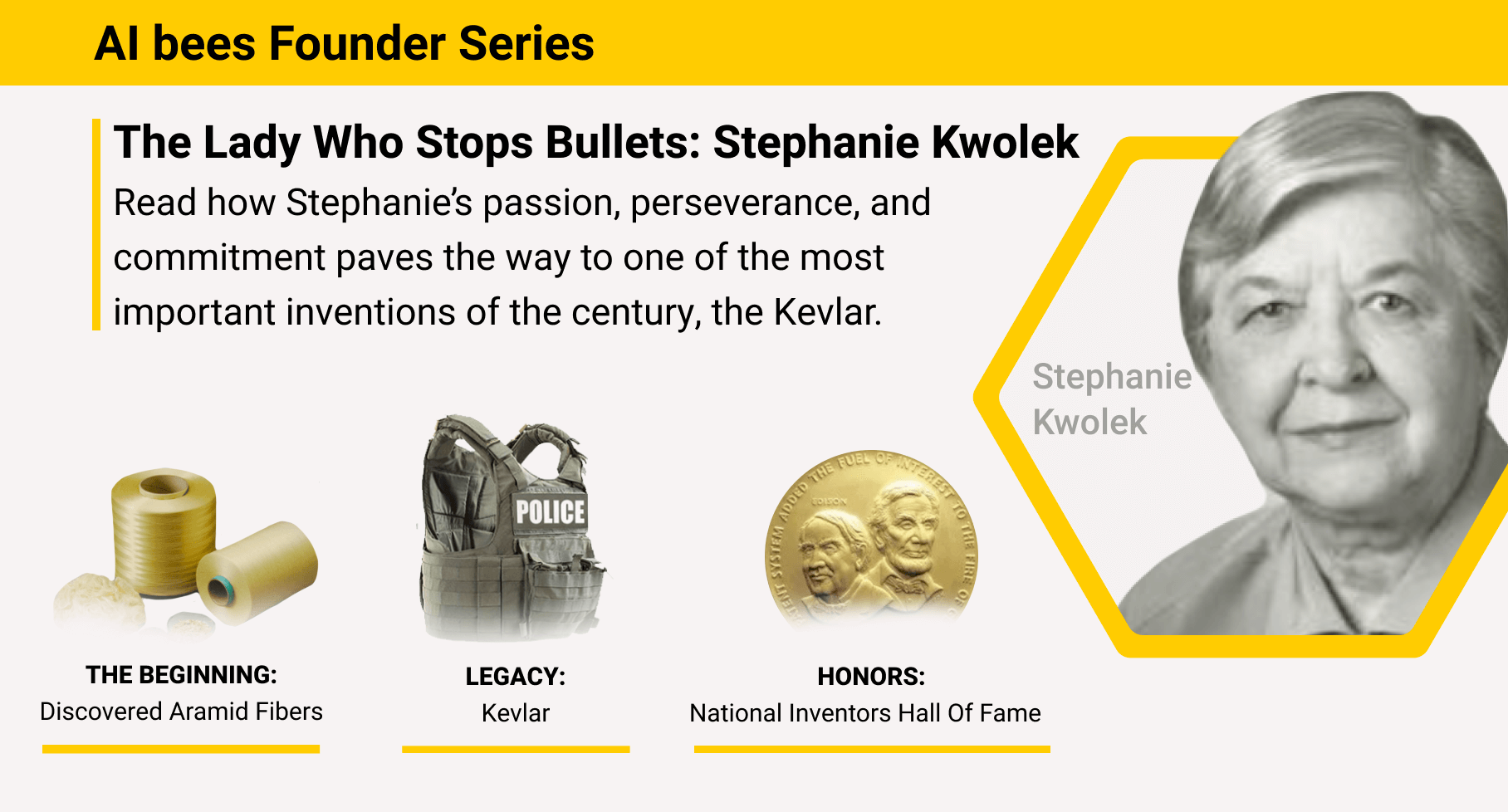 We celebrate all inventions that humankind has benefitted on. But sometimes, there will that one inventor who would come up with something with a hundred uses. Stephanie Kwolek was one of those.

Stephanie Kwolek was born in New Kensington, Pennsylvania, in 1923. Her father was a naturalist, and she loved going with him exploring the fields and woods near their home. He passed away when she was ten years old.

From her mother, Kwolek inherited her love of fabrics and sewing. Later on, she became interested in chemistry and medicine.

Stephanie Kwolek earned from Margaret Morrison Carnegie College of Carnegie Mellon University a Bachelor's degree with a Major in Chemistry in 1946.

She then began her career at DuPont in 1946 as a researcher. Initially, she planned on working there only temporarily to save money to attend medical school. She discovered the job fascinating and abandoned her plans of becoming a doctor, choosing to continue with her current career path.

Title or positions are not very important to her. As long as she is given the room and space and resources to advance her research, she was happy..

When she was in her 40s, DuPont asked her to scout for the next generation of fibers that could withstand extreme conditions. The objective is to develop a lightweight and strong fiber for tires. This work involved manipulating strings of carbon-based molecules to produce larger molecules known as polymers.

Scientists were afraid Kwolek's solution would break the spinneret (the machine that spins the liquid polyamide into fibers like a spinning wheel making thread). However, with a little convincing, they agreed to use it.

What followed was amazing.

Unlike steel, the material she had made was stiff and fire-resistant.

Immediately following her discovery, management at DuPont assigned a whole group of people to work on different aspects of the material.

What she was working on produced amazing results! The fibers spun from these polymers displayed unusual stiffness, later called Aramid fibers.

With that, Kevlar was born.

What Kwolek discovered proved to be very valuable for DuPont. DuPont honored Kwolek with the Lavoisier Medal for outstanding technical achievement for her discovery of Kevlar.

Stephanie Kwolek would ultimately obtain 28 patents during her 40-year tenure as a research scientist.

For her invention for the technology behind Kevlar, Stephanie Kwolek received the highest awards and recognition one can receive in her field of expertise.

-National Inventors Hall of Fame in 1994

-The National Medal of Technology in 1996

But according to Kwolek, the best application of her inventions is saving lives.

"I hope I'm saving lives. There are very few people in their careers that have the opportunity to do something to benefit mankind."

Kevlar is a heat-resistant, lightweight, and extremely strong synthetic fiber used as a reinforcing agent. Its fibers have high tensile strength, five times stronger than steel by weight.

Initially intended for the manufacture of tires, Kevlar is now used in more than 200 products to this date. And the most well-known of all are the bullet proof vests simply called Kevlar.

Indeed you have used an item with Kevlar as among the materials. Think of shoes, ropes, tennis racket strings, skis, and of course, car tires!

And most significantly, and what Kwolek is most proud and happy about, Kevlar has gone on to save lives as lightweight body armor for police and the military.

Kwolek’s invention is like her character. Unpretentious, strong, resilient and extremely useful.

We can learn a lot from her. As she says, “The fiber field is very complex since it involves many steps, any of which can lead to failures. To invent, I draw upon my knowledge, intuition, creativity, experience, common sense, perseverance, flexibility, and hard work. I try to visualize that desired product, its properties, and means of achieving it. I look for unusual developments that can affect the process, the polymer, and its properties. Some inventions result from unexpected events and the ability to recognize these and use them to advantage. Every invention involves a different strategy.”

Indeed, just like the fiber field, business is complex. Failure can happen. And when a failure occurs or is imminent, then don’t despair. Innovate, be creative, continue learning, work hard, and most of all, persevere.

If the outcome is not what you expected, you can still use them to your advantage. Start over and strategize.