Learn more about the First Black Female CEO of a Fortune 500 company who rose to the C-level.

Recognition: Forbes included her in 2018 as America's Top 50 Women in Tech 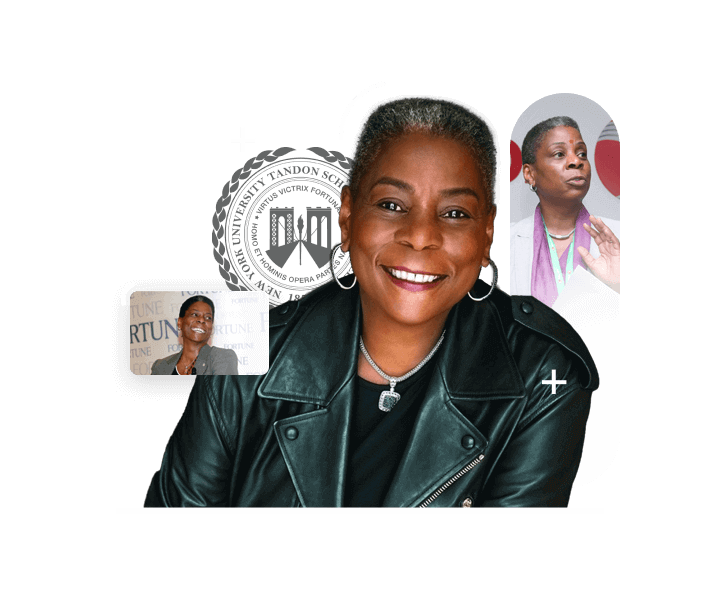 Started from the bottom, now on top.

Sometimes you just have to work with what you're given, and not all of us are born with a silver spoon. What if you are given a fork, a plate, or worse, a knife? What would you do?

A privileged person has an advantage or opportunity that most other people do not have, frequently because of their riches or connections with prominent individuals. But not all have those kinds of access.

Some people would probably look for a spoon to pair up their fork. Some would accept what they have and just deal with it. Some have the wrong choice to bring the privileged person down, but a commendable person would start from where they are, even at the bottom, rise on top and make their mark of privileges.

Privilege is not a term intended to make individuals feel guilty or minimize their accomplishments. Instead, becoming aware of your privileges is an essential first step toward being able to act boldly, in minor and significant ways, to leverage your privilege and make the institutions we were born into more equal.

One example of leveraging her only privilege is Ursula Burns. Raised in a non-favorable setting, single-income salary, and with only one guardian, her life is an inspiration for many young children. She only had access to good education, using it as a stepping stone.

Born on September 20, 1958, Ursula Burns was raised by a wonderful mother in the rough and tumble, low-income public housing projects.

Where is Ursula Burns from? She grew up in Manhattan's Delancey Street public housing. But really, where did Ursula Burns grow up? Ursula’s mother, Olga Racquel Burns, raised her in the Baruch Houses.

Growing up in welfare housing and being the second child of three by a single mother, Ursula Burns’ family received tests of character and faith. So what is Ursula Burns’ heritage? Her parents are from Panama, and both are Panamanian immigrants.

Panama is the crossroads to connect the world in more ways than one, and not only because it serves as a link between North and South America. Panama's culture combines African, American Indian, North American, and Spanish roots.

The territory that has become modern-day Panama was settled thousands of years ago by ancient civilizations and offered a rich mosaic of cultural variety where indigenous roots meet African ancestry and Spanish influence.

In addition to seeing some of the oldest colonial relics in this part of the world, such as the oldest Spanish fort and the first European settlement in the Pacific, a trip to Panama also provides the opportunity to see the traces of an ancient civilization that once lived here at El Caño Archaeological Park.

It is also a location through which numerous travelers have gone for hundreds of years.

For ages, Panama has served as a bridge for humanity and a point of meeting for people, products, and ideas. From where Ursula Burns’ family is from, they had only hoped that they brought inclusivity to the country they migrated.

In a story in leanin.org, she recalled,

Despite having three strikes, Olga’s mindset had faith in the outcome of their situation. She saw their future differently and constantly reminded Ursula that education was her ticket up and out.

It is ideal to have two parents to support three children. Even though her father was no longer around, Ursula’s mother was able to send her to attend a private school on a modest single-income salary.

Olga operated a running home day-care center while also taking in ironing and cleaning jobs. With her mother’s hardworking attitude, she was able to pay for Ursula Burns to attend Cathedral High School, a Roman Catholic preparatory school.

Inspired by her mother’s encouragement, Ursula was prepared for one of three career options: nun, teacher, or nurse.

She attended a Catholic all-girls school and was a math ace throughout her academics. But being a teacher, nun, or a nurse didn’t feel like the right path for Ursula. She looked deeper and went along with what she already knew and what skills she already had. As a math whiz, she dreamed of becoming an engineer.

Ursula Burns went to work at Xerox after receiving her master's degree, where she stayed for more than 20 years.

In 1980, Ursula began her career at Xerox as a summer mechanical-engineering intern under the company's graduate engineering program for minorities, which covered a portion of her college costs.

For the rest of the 1980s, she worked in various product development and planning positions at the corporation.

Wayland Hicks, at the time a senior executive, approached Burns about becoming his executive assistant in January 1990. She accepted his offer and worked for him for around nine months before going home to get married.

In June 1991, she was promoted to executive assistant to chairman and CEO Paul Allaire. Then she was appointed vice president of global manufacturing in 1999.

Ursula spearheaded the acquisition of Affiliated Computer Services shortly after being made CEO. While serving as CEO, Ursula was appointed an International Fellow of the Royal Academy of Engineering in 2013.

In 2016, Ursula oversaw the division of Xerox into two separate companies: Xerox Corporation and Conduent Incorporated. She remained chairperson and CEO of Xerox throughout the process and was later appointed chairwoman of the standalone document technology firm.

Jeff Jacobson succeeded Ursula Burns when she stepped down in December 2016. She served as chairwoman of the newly created document tech company until May 2017, when Burns resigned from the Xerox board of directors and her post as chairwoman.

In 2009, US President Barack Obama chose Ursula Burns to help manage the White House National STEM program, and she remained the STEM program's leader until 2016.

President Barack Obama selected Burns as vice-chair of the President's Export Council in March 2010, which she held from 2015 to 2016.

Ursula Burns has been on the boards of FIRST, the National Association of Manufacturers, Boston Scientific, the University of Rochester, the Rochester Business Alliance, the MIT Corporation, and the RUMP Group, among others.

Her current board memberships include American Express, Exxon Mobil Corporation, Datto Inc., and Nestlé. It was reported in July 2017 that Burns would join the board of directors of the beverage corporation Diageo on April 2, 2018.

Though Ursula Burns was announced to join the Diageo board as a non-executive director, the company said in March 2018 that "Burns will not take up her appointment as Non-Executive Director on the Diageo Board" since she has been appointed as temporary Executive Chairman of VEON.

In July 2017, Ursula Burns was elected chairman of the board of directors of VEON, the world's 11th biggest telecommunications service provider by users.

With the untimely resignation of the CEO in March 2018, Ursula was named executive chairperson until a selection process, and she was appointed CEO in December 2018.

Ursula Burns may have thought about being a nurse, teacher, or a nun, but never did she feel about being in the corporate business.

Ursula is an American businesswoman. Her most notable achievement is having been the CEO of Xerox from 2009 to 2016, thus becoming the first black woman to lead a Fortune 500 company. She is also the first woman to succeed another woman as CEO. Burns was also the chairperson of Xerox from 2010 until 2017.

Ursula Burns is also well-known for serving on the boards of several major American corporations, including Uber, American Express, and ExxonMobil.

Between 2013 and 2014, she served as vice-chairperson of The Business Council's executive committee. And from late 2018 until early 2020, she was the chairman and CEO of VEON and a senior advisor to Teneo.

Forbes has named her one of the world's 100 most powerful women several times. In 2015, she was ranked 29th. In 2018, Ursula Burns appeared and was named one of America's Top 50 Women in Tech.

Hacked emails from 2016 revealed she was on Hillary Clinton's list of potential vice presidential candidates.

Ursula Burns advises community, educational, and non-profit organizations such as FIRST (For Inspiration and Recognition of Science and Technology), the National Academy Foundation, MIT, and the US  Olympic Committee, to name a few.

She is a founding board member of Change the Equation, an organization dedicated to enhancing engineering and math education, science, and technology in the United States.

She has given commencement addresses at many outstanding universities, including MIT, Georgetown University, Howard University, Rochester Institute of Technology, Williams College, the University of Rochester, and Xavier University.

Ursula Burns met his lifelong partner, a retired Xerox scientist. They met in Xerox, and Burns married Lloyd Bean until he died in 2019; he also worked for Xerox. Ursula and Lloyd lived in Rochester, New York.

She has a 30-year-old daughter, Melissa (born around 1992), and a 33-year-old stepson, Malcolm (born around 1989). Ursula’s children, Melissa and Malcolm, both attended MIT. Burns has been a generous supporter of McQuaid Jesuit High School.

In 2021, Ursula published a memoir entitled “Where You Are Is Not Who You Are: A Memoir.”

Ursula Burns writes movingly of her rise from tenement housing to the highest levels of corporate leadership. Olga Racquel Burns, her single Panamanian mother, is credited with her success.

Her thirty-five-year career at Xerox was about repairing problems, from saving the company from bankruptcy to making a risky $6 billion acquisition to ensure its future. Ursula wrote about her experience and how she was a prominent player in President Barack Obama's STEM effort.

Throughout her career, she reflected on her problems and successes in this clever, no-nonsense book that was part memoir and part cultural commentary.

Ursula’s life has been a succession of lean moments: interning with Xerox in upstate New York, attending an Ivy League school for a doctorate, returning to Xerox full-time, and ascending the ladder to the top.

She made her mark as a CEO, and in turn, she led a significant acquisition that changed Xerox from a copy and printing company to a technology and services powerhouse.

Ursula has a big heart, not because she experienced the same but because she wanted to inspire others. She devoted so much time to organizations that provide minorities and women with the knowledge and self-esteem they need to take chances, dream big, and, maybe, eventually pay it forward.

Ursula recalls her devotion to education and hard work and how she used the possibilities and programs made available to her by the Civil Rights and Women's movements to study engineering, thanks to her mother. The latter placed no limits on what her children could achieve.

As an entrepreneur and an emerging engineer, be knowledgeable enough to know what you can and what you can’t. With proper balance to your priorities, you can imitate Ursula Burns in achieving what others are imposing otherwise.

Idealistic and pragmatic, empathetic and dedicated, Ursula proves that no matter what your circumstances are, grit, hard work, and a little help along the way can transform your life—and the world.